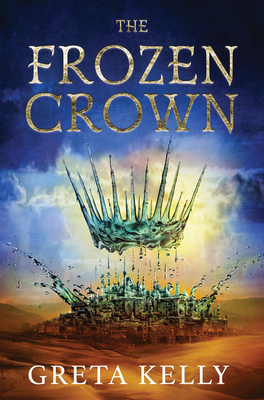 This is book number 1 in the Warrior Witch Duology series.

Princess Askia enters the neighboring country’s court life with the purpose of negotiating an army in order to save her kingdom. ?But she’s a princess brought up with sword fighting more than political games and is only beginning to understand her own forbidden, secret status as a witch. There’s a slow burn plot, filled with world- and relationship-building. But when I reached the second half it I realized how invested I was in the characters, became surprised at the audacity of the twists suddenly coming from every direction; blood is shed at the most inconvenient of times. The Frozen Crown be a great next read for fans of Queen of the Tearling and Graceling. I am so thankful I won’t have to wait too long for the other half of this duology because that cliffhanger was quite a doozy for my emotions.

"Propulsive and intricate, Greta Kelly has constructed a world of twisting politics and thrilling magic following a heroine who is both clever and uncompromising, but ultimately, has heart. A stellar read that I thoroughly enjoyed." -- Emily Duncan, New York Times bestselling author of Wicked Saints

A princess with a powerful and dangerous secret must find a way to save her country from ruthless invaders in this exciting debut fantasy, the first novel in a thrilling duology packed with heroism, treachery, magic, and war.

Askia became heir to the Frozen Crown of Seravesh because of her devotion to her people. But her realm is facing a threat she cannot defeat by sheer will alone. The mad emperor of the Roven Empire has unleashed a horde of invading soldiers to enslave her lands. For months, her warriors have waged a valiant, stealth battle, yet they cannot stop the enemy’s advancement. Running out of time, she sets sail for sun-drenched Vishir, the neighboring land to the south, to seek help from its ruler, Emperor Armaan.

A young woman raised in army camps, Askia is ill-equipped to navigate Vishir’s labyrinthine political games. Her every move sinks her deeper into court intrigues which bewilder and repel her, leaving her vulnerable not only to enemies gathering at Vishir's gates, but to those behind the palace walls.

And in this glittering court, where secrets are worth more than gold, Askia fears that one false step will expose her true nature. For Askia is a witch gifted with magical abilities—knowledge that could destroy not only her life but her people. As her adversaries draw closer, Askia is forced to make an impossible choice—and no matter what she decides, it may not be enough to prevent Seravesh’s fall.

Greta K. Kelly is (probably) not a witch, death or otherwise, but she can still be summoned with offerings of too-beautiful-to-use journals and Butterfingers candy. She currently lives in Wisconsin with her husband EJ, daughters Lorelei and Nadia who are doing their level-best to take over the world.

"Filled with magic, war, and intrigue, this thrilling high fantasy questions how much a ruler should be willing to sacrifice for the sake of duty. Vivid worldbuilding, high stakes, and just a hint of romance propel the twisty plot to a cliffhanger finale. Readers will be on the edges of their seats as they await the next installment." — Publishers Weekly (starred review)

"Kelly’s debut is a vivid epic fantasy of high political and personal stakes. Fans of Jennifer Estep’s “Crown of Shards” series will find much to love in the first of a duology." (Debut of the Month, Jan 2021)
— Library Journal (starred review)

"Packed with deadly intrigue, fierce and powerful women, and high stakes, Greta Kelly's fantasy-adventure debut, The Frozen Crown, is an exciting and intricate series opener … Fans of Sarah J. Maas and Mary E. Pearson should make sure to snap it up." — Shelf Awareness

“A gripping, intricate tale of court intrigue with no shortage of thought-provoking questions about power, morality, and identity. Askia is a strong-willed yet vulnerable and utterly human character that will linger in readers’ hearts and minds long after they turn the final page.” — Ava Reid, author of The Wolf and the Woodsman

“Queen, warrior, and witch – THE FROZEN CROWN delivers the kind of fantasy heroine I’ve longed for, the kind who is truly heroic. Askia’s story held me rapt from beginning to end, and I can’t wait for part two!” — Jeffe Kennedy, Award-winning author of the Forgotten Empires trilogy

“The Frozen Crown is fantasy at is best—bold, original and fiercely compelling." — Ausma Zehanat Khan, author of The Bloodprint