Anne of Manhattan: A Novel (Paperback) 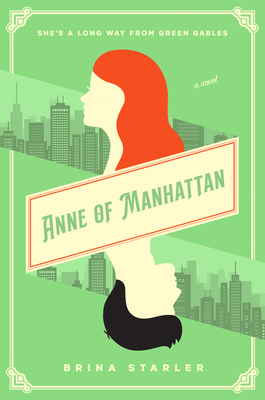 Anne of Manhattan: A Novel (Paperback)

A fun modern twist on a classic! This rom-com version of Anne and Gilbert is a perfect escape from reality. I've always been a fan of their romance arc, but this book take sit to the next level!

After an idyllic girlhood in Avonlea, Long Island, Anne has packed up her trunk, said goodbye to her foster parents, Marilla and Matthew, and moved to the isle of Manhattan for grad school. Together with her best friend, Diana Barry, she’s ready to take on the world and find her voice as a writer.

When her long-time archrival Gilbert Blythe shows up at Redmond College for their final year, Anne gets the shock of her life. Gil has been in California for the last five years—since he kissed her during a beach bonfire, and she ghosted him. Now the handsome brunette is flashing his dimples at her like he hasn’t a care in the world and she isn’t buying it.

Paired with the same professor for their thesis, the two former competitors come to a grudging peace that turns into something so much deeper…and sexier than either intended. But when Gil seemingly betrays her to get ahead, Anne realizes she was right all along—she should never have trusted Gilbert Blythe.

While Gil must prove to Anne that they’re meant to be together, she must come to terms with her old fears if she wants a happily-ever-after with the boy she’s always (secretly) loved.

Brina Starler writes and reads romance novels and romantic fiction—really, anything with kissing will do. She loves to bake, garden, and tweet for posterity about the bizarre things her kids say, and she is working her way through a truly frightening backlog of fan fiction. Brina lives in North Carolina with her husband, two boys, and a pup who bears a strong resemblance to Falkor the Luck Dragon. She has finally resigned herself to a future of asking tall people to get stuff off the top shelf.

"Full of warmth—and heat!—Anne of Manhattan is a blast for fans of the original Anne books. What fun to recognize “our” Anne, with all her quirks and passions, in this story of a thoroughly modern woman." — Jenny Holiday, author of A Prince for Christmas

“If you grew up reading Anne of Green Gables, you won't want to miss Brina Starler's Anne of Manhattan, a contemporary retelling of the classic love story…. Starler brings in many of the high points of the original series, and she delivers the snap and spark between Anne and Gilbert — as well as his slow burn love for Anne. Like the original, this isn't a story of two people falling in love, it's about two people realizing they've been in love the whole damn time.”
— NPR

“This is a sweet update to a classic story with an Anne Shirley fans will recognize and a Gilbert Blythe as dreamy as ever.”   — Publisher’s Weekly