Major Makes History: From the Shelter to the White House (Hardcover) 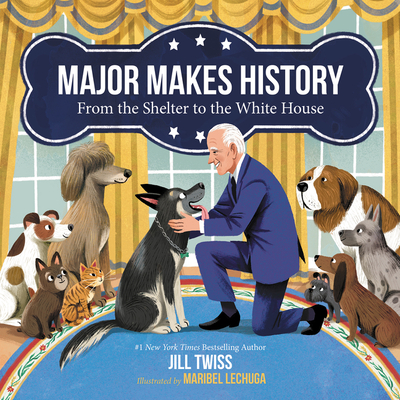 Emmy-winning New York Times bestselling author Jill Twiss delivers the tale of President Biden’s friendship with Major, the first shelter dog in the White House. Written in the dog’s voice, it tells of the German shepherd’s adjustment to the White House, and his urgent calling in life—to support and care for the president. Hilarious and filled with heart, this story includes back matter highlighting past presidential pets and information on adopting shelter animals.

When President Joe Biden adopted his shelter dog Major from the Delaware Humane Association in 2018, their bond was immediate. President Biden rescued Major and provided him with a loving home. What he didn’t know is that Major would also rescue him too.

Major tells the captivating, funny story of how he and Joe first met, and their journey to his brand-new home, the White House.

As a first dog, Major has a lot of work to do! It’s not easy being a presidential dog. Major defends President Biden from vicious vacuum cleaners, helps in the garden by digging holes, and drinks afternoon tea from the toilet bowl, along with his buddy Champ. But his most important job of all is helping Joe become a better version of himself.

Educational, fun, and adorable, this is a heartwarming book about the bond between a president and his very special shelter dog from the bestselling author of Everyone Gets a Say.

Jill Twiss is the author of Last Week Tonight with John Oliver Presents: A Day in the Life of Marlon Bundo, a New York Times #1 bestseller. She is also a comedy writer who has won multiple Emmys, WGA Awards, and Peabody Awards for her work as a staff writer on HBO’s Last Week Tonight with John Oliver. In her not-so-spare time, Jill writes sentences for the Scripps National Spelling Bee on ESPN and is working on a musical about the women of the Seneca Falls Convention.