The Book of the Hopi (Paperback) 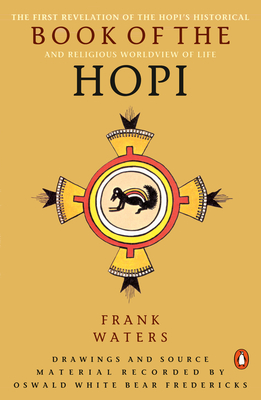 The Book of the Hopi (Paperback)

In this strange and wonderful book, thirty elders of the ancient Hopi tribe of Northern Arizona—a people who regard themselves as the first inhabitants of America—freely reveal the Hopi worldview for the first time in written form. The Hopi kept this view a secret for countless centuries, and anthropologists have long struggled to understand it. Now they record their myths and legends, and the meaning of their religious rituals and ceremonies as a gift to future generations. Here is a reassertion of a rhythm of life we have disastrously tried to ignore and instincts we have tragically repressed, and a reminder that we must attune ourselves to the need for inner change if we are to avert a cataclysmic rupture between our minds and hearts.
Frank Waters (1902–1995) was a writer best known for his novels and historical writings about the American Southwest. His most notable works are the novel The Man Who Killed the Deer, and the nonfiction books Mexico Mystique: The Coming Sixth World of Consciousness and Book of the Hopi. In 1993, a nonprofit foundation was established in his name to foster literary and artistic achievements in the Southwest.
"Deeply steeped in Hopi mysticism...Combine(s) Hopi art, history, tradition, myth, folklore, and ceremonialism with dignity and authority...Deserves to be part of the library of any student of the American Southwest."
—American Anthropologist