Children of the Holocaust: Conversations with Sons and Daughters of Survivors (Paperback) 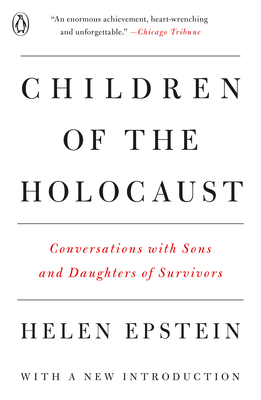 Children of the Holocaust: Conversations with Sons and Daughters of Survivors (Paperback)


Email or call for price.
"I set out to find a group of people who, like me, were possessed by a history they had never lived."

The daughter of Holocaust survivors, Helen Epstein traveled from America to Europe to Israel, searching for one vital thin in common: their parent's persecution by the Nazis. She found:

• Gabriela Korda, who was raised by her parents as a German Protestant in South America;
• Albert Singerman, who fought in the jungles of Vietnam to prove that he, too, could survive a grueling ordeal;
• Deborah Schwartz, a Southern beauty queen who—at the Miss America pageant, played the same Chopin piece that was played over Polish radio during Hitler's invasion.

Epstein interviewed hundreds of men and women coping with an extraordinary legacy. In each, she found shades of herself.

Helen Epstein is the author of four previous books, including Children Of The Holocaust, Joe Papp: An American Life, and Music Talks, and her articles have been featured in The New York Times, the Miami Herald, and many Judaica periodicals. She is an affiliate of Harvard University's Center for European Studies.