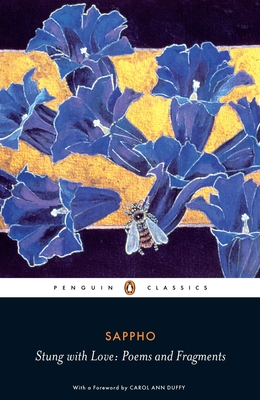 
On Our Shelves Now
More or less 150 years after Homer's Iliad, Sappho lived on the island of Lesbos, west off the coast of what is present Turkey. Little remains today of her writings, which are said to have filled nine papyrus rolls in the great library at Alexandria some 500 years after her death. The surviving texts consist of a lamentably small and fragmented body of lyric poetry—among them poems of invocation, desire, spite, celebration, resignation and remembrance—that nevertheless enables us to hear the living voice of the poet Plato called the tenth Muse. This is a new translation of her surviving poetry.

For more than seventy years, Penguin has been the leading publisher of classic literature in the English-speaking world. With more than 1,700 titles, Penguin Classics represents a global bookshelf of the best works throughout history and across genres and disciplines. Readers trust the series to provide authoritative texts enhanced by introductions and notes by distinguished scholars and contemporary authors, as well as up-to-date translations by award-winning translators.
Sappho was born sometime between 630 and 617 BCE and died around 570. Little of certainty is known about her life. A native of the island of Lesbos, she resided in its largest city, Mytilene. She composed songs for choral and solo performance on a wide range of themes but is best known for amatory songs focusing on adolescent females. She is renowned as the first woman poet in literary history, and her songs have been universally admired throughout antiquity and modernity.

Aaron Poochigian was born in 1973. He was a visiting professor of Classics at the University of Utah and is currently D.L. Jordon Fellow at Roanoke College in Salem, Virginia. His poems and translations have appeared in a number of journals, including Chimaera, Classical Journal, and Unsplendid.

Carol Ann Duffy's poetry has received every major award in Britain, including the Whitbread and the Forward prized for Mean Time and the T.S. Eliot Award for Rapture. In the United States, she has received the E.M. Forster and Lannan Awards. She has also written extensively for children and has editied many anthologies.