A Field Guide to Getting Lost (Paperback) 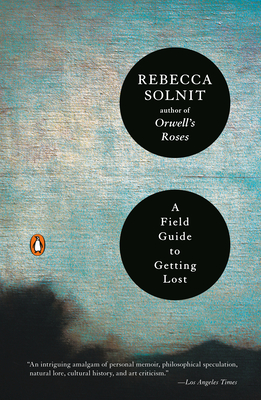 A Field Guide to Getting Lost (Paperback)

From the award-winning author of Orwell's Roses, a stimulating exploration of wandering, being lost, and the uses of the unknown

Written as a series of autobiographical essays, A Field Guide to Getting Lost draws on emblematic moments and relationships in Rebecca Solnit's life to explore issues of uncertainty, trust, loss, memory, desire, and place. Solnit is interested in the stories we use to navigate our way through the world, and the places we traverse, from wilderness to cities, in finding ourselves, or losing ourselves. While deeply personal, her own stories link up to larger stories, from captivity narratives of early Americans to the use of the color blue in Renaissance painting, not to mention encounters with tortoises, monks, punk rockers, mountains, deserts, and the movie Vertigo. The result is a distinctive, stimulating voyage of discovery.
Writer, historian, and activist Rebecca Solnit is the author of seventeen books about environment, landscape, community, art, politics, hope, and feminism, including three atlases, of San Francisco in 2010, New Orleans in 2013, and New York in 2016; Men Explain Things to Me; The Faraway Nearby; A Field Guide to Getting Lost; Wanderlust: A History of Walking; and River of Shadows: Eadweard Muybridge and the Technological Wild West (for which she received a Guggenheim, The National Book Critics Circle Award in Criticism, and the Lannan Literary Award). She is a columnist at Harper's and a regular contributor to The Guardian. She lives in San Francisco.
Praise for A Field Guide to Getting Lost:

"Solnit has been compared to both Annie Dillard and Susan Sontag . . . her own work resembles a richly conceived character, capable of sudden turns and sharp twists, changing direction from book to book and page to page in ways that, in retrospect, are nevertheless consistent with what she's done before. [A Field Guide to Getting Lost] has something close to perfect pitch, an intermezzo in an increasingly impressive career."
—The Nation

"An altogether sublime collection. . . she sees in the act of embracing the unknown a gateway to self-transcendence."
—Maria Popova, Brainpickings.org

"This indespensable California writer's most personal book yet, alive as ever to the subtle nuances of the natural world, but newly responsive to the promptings of her own heart and history."
—San Fransisco Chronicle

"This meditation on the pleasures and terrors of getting lost is . . . a series of peregrinations, leading the reader to unexpected vistas."
—The New Yorker

"An ode to losing yourself and finding out what's on the other side of familiarity. For Ms. Solnit . . . getting lost is more than a matter of merely physical circumstances. It's a state of mind to be embraced and explored, a gateway to discovering more about yourself in relation to the rest of the world."
—The Dallas Morning News