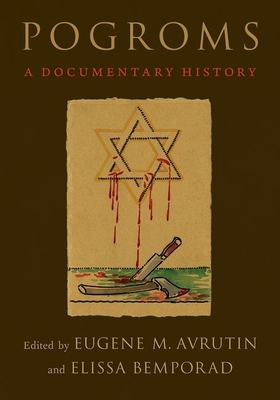 
Usually Ships in 2-5 Days
From the 1880s to the 1940s, an upsurge of explosive pogroms caused much pain and suffering across the eastern borderlands of Europe. Rioters attacked Jewish property and caused physical harm to women and children. During World War I and the Russian Civil War, pogrom violence turned into
full-blown military actions. In some cases, pogroms wiped out of existence entire Jewish communities. More generally, they were part of a larger story of destruction, ethnic purification, and coexistence that played out in the region over a span of some six decades. Pogroms: A Documentary History surveys the complex history of anti-Jewish violence by bringing together archival and published sources--many appearing for the first time in English translation. The documents assembled here include eyewitness testimony, oral histories, diary excerpts, literary works,
trial records, and press coverage. They also include memos and field reports authored by army officials, investigative commissions, humanitarian organizations, and government officials. This landmark volume and its distinguished roster of scholars provides an unprecedented view of the history of
pogroms.

Eugene M. Avrutin is the Tobor Family Endowed Professor of Modern European Jewish History at the University of Illinois. He is the author and coeditor of seven books, including The Velizh Affair: Blood Libel in a Russian Town. Elissa Bemporad is the Jerry and William Ungar Professor of History at Queens College and the Graduate Center, CUNY. She is the author of Becoming Soviet Jews: The Bolshevik Experiment in Minsk, and most recently of Legacy of Blood: Jews, Pogroms, and Ritual Murder in the Lands of the Soviets.