Legacy of Blood: Jews, Pogroms, and Ritual Murder in the Lands of the Soviets (Hardcover) 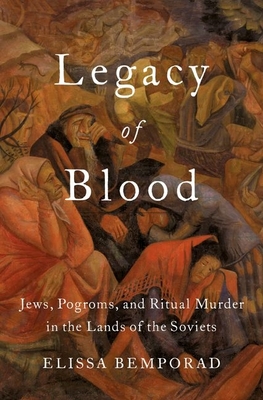 Legacy of Blood: Jews, Pogroms, and Ritual Murder in the Lands of the Soviets (Hardcover)


Usually Ships in 2-5 Days
This book traces the legacies of the two most extreme manifestations of tsarist antisemitism-pogroms and blood libels-in the Soviet Union, from 1917 to the early 1960s. Closely intertwined in history and memory, pogroms and blood libels were and are considered central to the Jewish experience in late Tsarist Russia, the only country on earth with large scale anti-Jewish violence in the early twentieth century. But their persistence and memory under the Bolsheviks-a chapter that is largely overlooked by the existing scholarship-significantly shaped the Soviet Jewish experience. By exploring the phenomenon and the memory of pogroms and blood libels in the Soviet territories of the interwar period as well as, after World War II, in the newly annexed territories, Bemporad studies the social realities of everyday antisemitism through the emergence of communities of violence and memories of violence. The fifty-year-span from the Bolshevik Revolution to the early years of Krushchev included a living generation of Jews, and non-Jews alike, who remembered the Beilis Affair, the pogroms of the civil war and in some cases even the violence of the prerevolutionary years. Bemporad also examines the ways in which Jews reacted to and remembered the unprecedented violence of the pogroms of the Russian Civil War, and how they responded to and which strategies they adopted to confront accusations of ritual murder. By tracing the afterlife of pogroms and blood libels in the USSR, Legacy of Blood sheds light on the broader question of the changing position of Jews in Soviet
society. And by doing so it tells the story of the solid yet ever changing and at times ambivalent relationship between the Soviet state and the Jewish minority group.

A native of Italy, Elissa Bemporad grew up in Modena. She studied Russian language and History at the University of Bologna and earned her doctoral degree from Stanford University. Bemproad lived in Minsk, Belarus, for a year, where she conducted archival research for her first book, Becoming Soviet Jews: The Bolshevik Experiment in Minsk. She is also the author of Women and Genocide: Survivors, Victims, Perpetrators.