Not Even My Name: A True Story (Paperback) 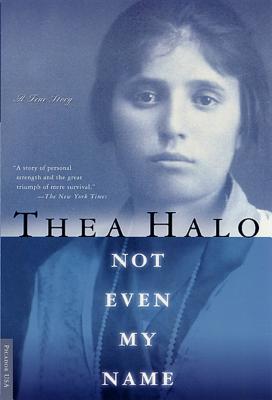 Not Even My Name: A True Story (Paperback)

A riveting account of exile from Turkish genocide, brought to light for the first time ever in Sano Halo's personal story

Not Even My Name exposes the genocide carried out during and after WW I in Turkey, which brought to a tragic end the 3000-year history of the Pontic Greeks (named for the Pontic Mountain range below the Black Sea). During this time, almost 2 million Pontic Greeks and Armenians were slaughtered and millions of others were exiled.

Not Even My Name is the unforgettable story of Sano Halo's survival, as told to her daughter, Thea, and of their trip to Turkey in search of Sano's home 70 years after her exile. Sano Halo was a 10-year-old girl when she was torn from her ancient, pastoral way of life in the mountains and sent on a death march that annihilated her family. Stripped of everything she had ever held dear, even her name, Sano was sold by her surrogate family into marriage when still a child to a man three times her age.

Not Even My Name follows Sano's marriage, the raising of her ten children in New York City, and her transformation as an innocent girl who was forced to move from a bucolic life to the 20th century in one bold stride. Written in haunting and eloquent prose, Not Even My Name weaves a seamless texture of individual and group memory, evoking all the suspense and drama of the best told tales.

Thea Halo has worked as an announcer, producer, and correspondent for public radio. She has won a number of awards for her poetry and other writing, which includes short stories, plays, and a newspaper column. She is the author of Not Even My Name.

“In telling her mother's epic story of survival and ultimate triumph in America, Thea Halo has written an important book about a largely unknown history: the genocide of the Pontic Greeks at the hands of the Turkish government in the years following World War I. Thea Halo's deeply moving portrait of her mother reverberates with large moral issues that affect us all.” —Peter Balakian, author of Black Dog of Fate

“As written by her daughter, Thea, Sano's harrowing account of the destruction of her family and her world is told with such vivid detail that every page sears the mind and heart . . . A work of burning intensity, self-evidently powerful and true.” —Nicholas Gage, author of Eleni

“Deeply moving . . . It is impossible to read the story of this woman's life without marveling at the strength of her spirit.” —The Washington Post Book World

“A story of personal strength and the great triumph of mere survival.” —The New York Times

“Sano Halo's tale is devoid of pretense, literary or historical, and it is all the stronger for it.” —Michael Doran, Washington Post Book World