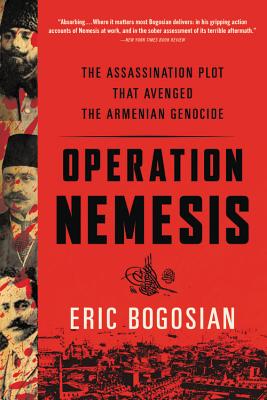 
Usually Ships in 2-5 Days
A masterful account of the assassins who hunted down the perpetrators of the Armenian Genocide.

In 1921, a tightly knit band of killers set out to avenge the deaths of almost one million victims of the Armenian Genocide. They were a humble bunch: an accountant, a life insurance salesman, a newspaper editor, an engineering student, and a diplomat. Together they formed one of the most effective assassination squads in history. They named their operation Nemesis, after the Greek goddess of retribution. The assassins were survivors, men defined by the massive tragedy that had devastated their people. With operatives on three continents, the Nemesis team killed six major Turkish leaders in Berlin, Constantinople, Tiflis, and Rome, only to disband and suddenly disappear. The story of this secret operation has never been fully told, until now.

Eric Bogosian goes beyond simply telling the story of this cadre of Armenian assassins by setting the killings in the context of Ottoman and Armenian history, as well as showing in vivid color the era's history, rife with political fighting and massacres. Casting fresh light on one of the great crimes of the twentieth century and one of history's most remarkable acts of vengeance, Bogosian draws upon years of research and newly uncovered evidence. Operation Nemesis is the result -- both a riveting read and a profound examination of evil, revenge, and the costs of violence.
Eric Bogosian is an actor, playwright, and novelist of Armenian descent. He was a Pulitzer Prize finalist for his play Talk Radio, and is the recipient of the Berlin Film Festival's Silver Bear Award, as well as three Obie Awards and the Drama Desk. In addition to his celebrated work in the theater and onscreen, he has authored three novels. He lives in New York City with the director Jo Bonney.
"Absorbing reading.... To his great credit, Bogosian recognizes [the moral contradiction] and refuses to portray Tehlirian or any of the other members of his group as heroes. He's aware of the gravitas of his story and the need to set it in context....Where it matters most he delivers: in his gripping action accounts of Nemesis at work, and in the sober assessment of its terrible aftermath."—Joseph Kanon, New York Times Book Review

"Hitler asked, 'Who remembers the Armenians?' Eric Bogosian, that's who. Read his potent, action-packed account of how a little known assassination plot harkens back to a world-historical genocide and so will you. So take that, Hitler."—Sarah Vowell, author of The Wordy Shipmates and Assassination Vacation

"A dark and compelling tale of blood vengeance. In Operation Nemesis, Eric Bogosian tells the remarkable story of how a small group of powerless, post-war assassins sought revenge against the all-powerful masterminds of the Armenian genocide."—Annie Jacobsen, author of Operation Paperclip

"Absorbing and accessible, Bogosian presents this complex and multi-layered history with a master dramatist's flair. Operation Nemesis is an engaged and provocative account of an unforgettable tragedy and a cathartic attempt at finding justice."—Atom Egoyan, Academy Award-nominated writer and director of The Sweet Hereafter and Ararat

"Eric Bogosian, actor, playwright and novelist, can now add historian to his resume with this carefully researched tale of organized revenge on the perpetrators of one of the most heinous state-engineered genocides in modern history--the murderous expulsion of the Armenian people from Ataturk's newly reconstituted Turkey."—Richard Price, author of The Whites

"A dramatic work of history that reads like a thriller.... Though others have covered Operation Nemesis, Bogosian's extensive reliance on the assassin's memoirs, published seven years before his death in 1960, injects his account with the psychological highs and lows Tehlirian endured. Bogosian also uncovers intriguing details about the role of the British in the assassination plot, introducing a new twist to a story that reads like a John le Carré novel."—Michael Bobelian, Los Angeles Times

"An engrossing, heavily-researched account.... The details read like a Hollywood epic, but Bogosian plays it straight, letting the facts tell the story without sensationalizing or romanticizing.... Highly readable."—Publishers Weekly

"Bogosian dives passionately into an underreported piece of history, a surprisingly effective conspiracy to assassinate the planners of Turkey's Armenian genocide."—Boris Kachka, Vulture

"If you think you know all the great thriller stories of the last century, you don't. And this one is true. Operation Nemesis reads like a high-stakes suspense novel, but it tells us something essential about the world we're living in right now."—Peter Blauner, author of Slipping Into Darkness and Slow Motion Riot

"This genocide has finally come to light and Eric's book takes you uncomfortably close to it. It's a must read!"—Whoopi Goldberg

"Operation Nemesis is a spell-binding book. It is written both with urgency and patience. Bogosian's chapter summarizing the "variety of peoples who crossed and recrossed" Anatolia is as good as any of the half-dozen established accounts I've read. His play-by-play story of the Armenian assassins avenging the Armenian genocide (1915-20) is as gripping as a Graham Greene novel. The whole book is a significant contribution to the history of Asia Minor and its effect on our present world."—John Casey, author of National Book Award winner Spartina

"In this resurrection of a lost story, Eric Bogosian vividly tells the story of the assassins who avenged the Ottoman mass killings of Armenians in 1915. Unfolding like a thriller, Bogosian's history brings to life long-forgotten events and the courageous people who set out in their own way to bring a kind of justice and peace to their shared past."—Ronald Grigor Suny, Professor of History and Political Science, University of Michigan, and author of They Can Live in the Desert But Nowhere Else: A History of the Armenian Genocide

"A page-turning new thriller -- and [Bogosian's] breathless tale of four ordinary Americans out to avenge the Armenian genocide is all the more compelling because every word of it is true."—Bill Hoffmann, Newsmax

"A clear, concise view of Turkey's history in the 20th century, and it's not pretty. Difficult reading, but an extremely well-written political statement about Turkey--not just then, but as it is now."—Kirkus

"Eric Bogosian's Operation Nemesis takes us into the complex aftermath of the Armenian genocide and reminds us that genocide committed without ethical or legal accountability results in protracted trauma and open wounds that can lead to more violence in efforts to seek justice. A dramatic and important book."—Peter Balakian, author of Black Dog of Fate