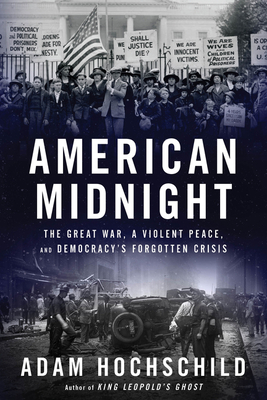 National Bestseller • One of the year's most acclaimed works of nonfiction

From legendary historian Adam Hochschild, a "masterly" (New York Times) reassessment of the overlooked but startlingly resonant period between World War I and the Roaring Twenties, when the foundations of American democracy were threatened by war, pandemic, and violence fueled by battles over race, immigration, and the rights of labor

The nation was on the brink. Mobs burned Black churches to the ground. Courts threw thousands of people into prison for opinions they voiced—in one notable case, only in private. Self-appointed vigilantes executed tens of thousands of citizens’ arrests. Some seventy-five newspapers and magazines were banned from the mail and forced to close. When the government stepped in, it was often to fan the flames.

This was America during and after the Great War: a brief but appalling era blighted by lynchings, censorship, and the sadistic, sometimes fatal abuse of conscientious objectors in military prisons—a time whose toxic currents of racism, nativism, red-baiting, and contempt for the rule of law then flowed directly through the intervening decades to poison our own. It was a tumultuous period defined by a diverse and colorful cast of characters, some of whom fueled the injustice while others fought against it: from the sphinxlike Woodrow Wilson, to the fiery antiwar advocates Kate Richards O’Hare and Emma Goldman, to labor champion Eugene Debs, to a little-known but ambitious bureaucrat named J. Edgar Hoover, and to an outspoken leftwing agitator—who was in fact Hoover’s star undercover agent. It is a time that we have mostly forgotten about, until now.

In American Midnight, award-winning historian Adam Hochschild brings alive the horrifying yet inspiring four years following the U.S. entry into the First World War, spotlighting forgotten repression while celebrating an unforgettable set of Americans who strove to fix their fractured country—and showing how their struggles still guide us today.

“In American Midnight, the historian Adam Hochschild, celebrated for his King Leopold’s Ghost and other volumes, recounts it with verve and insight… one of several fresh looks at a period that had previously received little widespread attention...Hochschild narrates a time as unsettled, frightening, and (perhaps) transformative as our own.”
— Boston Globe

“A sweeping look at the years between World War I and the Roaring Twenties, when conscientious objectors to the war were maltreated and conflicts over race and labor were at a high pitch. Hochschild draws direct lines between events of that time and the unrest of today.”
— New York Times, 15 Works of Nonfiction to Read This Fall

"A harrowing portrait of America in 1917-21, rife with racist violence, xenophobia and political repression abetted by the federal government. The book serves as a cautionary tale and a provocative counterpoint to our own era." — New York Times Book Review, Editors' Choice

“Exceptionally well written, impeccably organized, and filled with colorful, fully developed historical characters. … A riveting, resonant account of the fragility of freedom in one of many shameful periods in U.S. history.”  — Kirkus Reviews (starred review)

"Expanding his history begun in To End All Wars (2011), Hochschild brings to light people and themes that are often mere footnotes in other records of the Great War.”
— Booklist (starred review)

“Meticulously researched, fluidly written, and frequently enraging, this is a timely reminder of the ‘vigilant respect for civil rights and Constitutional safeguards’ needed to protect democracy and forestall authoritarianism.” — Publishers Weekly (starred review)

“During the United States’ current tumultuous times, it is important to remember and revisit the forgotten injustices of the previous century. Hochschild succinctly does so here.” — Library Journal (starred review)

“Award-winning historian Adam Hochschild (King Leopold's Ghost, To End All Wars and Bury the Chains) provides a timely, fast-paced, revelatory new account of a pivotal but neglected period in American history: World War I and its stormy aftermath, when bloodshed and repression on the home front nearly doomed American democracy. The period's toxic currents of racism, nativism, red-baiting, and contempt for the rule of law feel ominously familiar today.” — Shelf Awareness

"The post-WWI 'red scare' was the most vicious period of violent repression in U.S. history, apart from the two original sins [slavery and 'Indian removal']. The shocking story is recounted in vivid detail in Adam Hochschild’s penetrating study American Midnight." — Noam Chomsky, Truthout

"Hochschild's masterful new book ... chronicles our nation’s horrific period from 1917-21, when Woodrow Wilson, his men, and a paranoid culture went to war against union activists, immigrants, resisters, and Black people, among others — on a level that should forever shatter any myth about American Exceptionalism. A cautionary tale of what happens when democracy goes off the rails." — Will Bunch, Philadelphia Inquirer

"The most useful books offer clarity on issues that have animated debate for years. For example, Adam Hochschild’s American Midnight, a broad account of the aftermath of the U.S. joining the First World War, highlights the nativist sentiment that radicalized some Americans against immigrants then, just as it does today." — Kate Cray, The Atlantic

"An account of the U.S. after World War I, when hatred, violence, racism, and economic uncertainty threatened democracy. The parallels with today's world are terrifying." — Isabel Allende, Daily Mail (London), "Best Reads of the Year"

“American Midnight is a potent reminder of what happens when open discourse is systemically punished. The story happens to be more than 100 years old, which doesn’t mean it can’t happen again." — San Francisco Chronicle

"The four years of American history from 1917 to 1921 are underexamined, but, in this account, they emerge as pivotal." — New Yorker

"A terrific new account of America’s social and political turmoil during the 1910s and ’20s provides some much-needed perspective on the problems afflicting the country today. ... Like all the best history books, American Midnight reads like a novel with three-dimensional characters." — Quillette

"This is undoubtedly one of the year’s best and most important histories." — AudioFile Magazine

"A grim (but ultimately hopeful) account of how American democracy survived the dark period between 1917 and 1921 when racism, anti-immigrant sentiment and dangerous white nationalism swelled following the Great War." — Globe and Mail (Toronto), "Best Books to Give This Year"

"Hochschild forces readers to confront the abuses and remember those who had the courage to fight against militarism and speak up for the powerless and dispossessed. ... Vivid." — Financial Times

"If you often worry about the political polarization of the 2020s, you should pick up historian Adam Hochschild’s clear-eyed and elegantly written new book covering the years surrounding World War I. This period of U.S. history is often glanced over and yet, as Hochschild observes, it was a time with more than a few echoes of the current moment." — Fast Company