Brave the Wild River: The Untold Story of Two Women Who Mapped the Botany of the Grand Canyon (Hardcover) 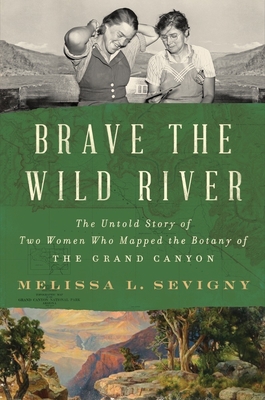 Brave the Wild River: The Untold Story of Two Women Who Mapped the Botany of the Grand Canyon (Hardcover)

The riveting tale of two pioneering botanists and their historic boat trip down the Colorado River through the Grand Canyon.

In the summer of 1938, botanists Elzada Clover and Lois Jotter set off down the Colorado River, accompanied by an ambitious expedition leader and three amateur boatmen. With its churning rapids, sheer cliffs, and boat-shattering boulders, the Colorado was famed as the most dangerous river in the world. But for Clover and Jotter, it held a tantalizing appeal: no one had surveyed the Grand Canyon’s plants, and they were determined to be the first.

Through the vibrant letters and diaries of the two women, science journalist Melissa L. Sevigny traces their forty-three-day journey, during which they ran rapids, chased a runaway boat, and turned their harshest critic into an ally. Their story is a spellbinding adventure of two women who risked their lives to make an unprecedented botanical survey of a little-known corner of the American West at a time when human influences had begun to change it forever.

Melissa L. Sevigny is a science journalist at KNAU (Arizona Public Radio). She has worked in in water policy, sustainable agriculture, and space exploration, and is the author of Under Desert Skies and Mythical River. She lives in Flagstaff, Arizona.
In Brave the Wild River, Melissa Sevigny unfurls one of the finest river stories of the Grand Canyon while presenting a long overdue, richly deserved, and beautifully written tribute to a pair of legendary botanists who peeled back the petals of a mysterious, intoxicating landscape, and made it blossom with new knowledge and wonder.

— Kevin Fedarko, author of The Emerald Mile: The Epic Story of the Fastest Ride in History Through the Heart of the Grand Canyon