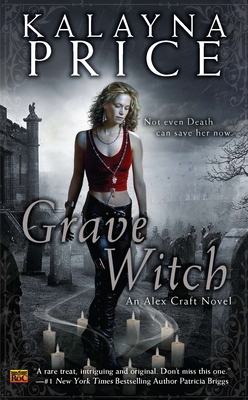 This is book number 1 in the An Alex Craft Novel series.

I love Urban Fantasies. Grave Witch is true to it's genre, a thrilling fantasy world coexisting with the mirror of our modern society. The Magical Awakening brought Faeries, dangerous and deadly creatures who thrive on mortal belief, into the light. Wyrd Witches also emerged, mortal humans who can manipulate magic, caste spells, create charms, and even raise the dead. Alex Craft is a Grave Witch, a type of Wyrd Witch who has an affinity for the dead and can raise shades (similar to ghosts, but they go away after the witch is done with them). Working as a PI, Alex stumbles across a case that will test her skills as a witch and as a detective.
I love it! The mystery, the drama, the action... The melding of worlds and the concept of magic is seamless and stunning.

Grave witch Alex Craft can speak to the dead, but that doesn’t mean she likes what they have to say.

As a private investigator and consultant for the police, Alex Craft has seen a lot of dark magic. But even though she's on good terms with Death himself, nothing has prepared her for her latest case. When she's raising a "shade" involved in a high profile murder, it attacks her, and then someone makes an attempt on her life.

Someone really doesn't want her to know what the dead have to say, and she'll have to work with mysterious homicide detective Falin Andrews to figure out why....
Kalayna Price is the USA Today bestselling author of the Alex Craft novels including Grave Ransom, Grave Visions, Grave Memory, Grave Dance, and Grave Witch. Ms. Price draws her ideas from the world around her, her studies into ancient mythologies, and her obsession with classic folklore.
Praise for the USA Today bestselling Alex Craft novels

“An endlessly entertaining world....Alex Craft is quickly becoming one of the heavy-hitting protagonists in urban fantasy.”—All Things Urban Fantasy

“If you love urban fantasy, DO NOT miss out on this series.”—Kings River Life Magazine

“This series is more addictive than chocolate.”—Huntress Book Reviews