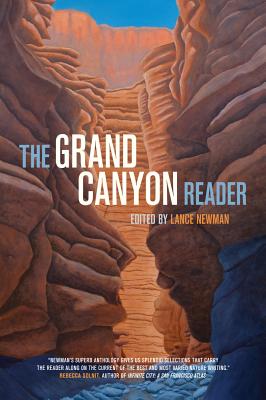 
On Our Shelves Now
This superb anthology brings together some of the most powerful and compelling writing about the Grand Canyon—stories, essays, and poems written across five centuries by people inhabiting, surviving, and attempting to understand what one explorer called the "Great Unknown." The Grand Canyon Reader includes traditional stories from native tribes, reports by explorers, journals by early tourists, and contemporary essays and stories by such beloved writers as John McPhee, Ann Zwinger, Edward Abbey, Terry Tempest Williams, Barry Lopez, Linda Hogan, and Craig Childs. Lively tales written by unschooled river runners, unabashedly popular fiction, and memoirs stand alongside finely crafted literary works to represent full range of human experience in this wild, daunting, and inspiring landscape.

Lance Newman, Professor of English at Westminster College, has worked as a Grand Canyon river guide for twenty years. He is the author of Our Common Dwelling: Henry Thoreau, Transcendentalism, and the Class Politics of Nature as well as two chapbooks of poems, 3by3by3 and Come Kanab: A Little Red Songbook.
“The stories tell of the delight and wonder that is the Grand Canyon. . . . The timelessness of the canyon means that the excitement continues . . . and ‘The Grand Canyon Reader’ takes us along for the ride.”
— Julie Cart

“Word of warning: Reading the essays in this book will make you want to drop everything and traverse the Grand Canyon, rim-to-rim, if only to avoid the tourists hovering. But, with offerings from the likes of John McPhee, Barry Lopez, Wallace Stegner and that curmudgeon Edward Abbey, it also makes you think.”
— Sam McManis

“A great new compilation of short stories, essays, and poetry regaling the Grand Canyon. . . . Mr. Newman has pulled together in one book a rich collection of stories that bring to life the river and its surrounding canyon, and keeps it alive.”
— Kurt Repanshek