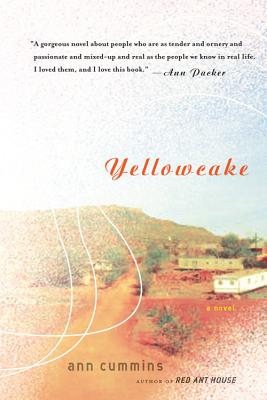 
Usually Ships in 2-5 Days
For her acclaimed collection of stories, Red Ant House, Joyce Carol Oates hailed Ann Cummins as “a master storyteller.” The San Francisco Chronicle called her “startlingly original.” Now, in her debut novel, Cummins stakes claim to rich new literary territory with a story of straddling cultures and cheating fate in the American Southwest.
Yellowcake introduces us to two unforgettable families—one Navajo, one Anglo—some thirty years after the closing of the uranium mill near which they once made their homes. When little Becky Atcitty shows up on the Mahoneys’ doorstep all grown up, the past comes crashing in on Ryland and his lively brood. Becky, the daughter of one of the Navajo mill workers Ryland had supervised, is now involved in a group seeking damages for those harmed by the radioactive dust that contaminated their world. But Ryland wants no part of dredging up their past—or acknowledging his future. When his wife joins the cause, the messy, modern lives of this eclectic cast of characters collide once again, testing their mettle, stretching their faith, and reconnecting past and present in unexpected new ways.

Finely crafted, deeply felt, and bursting with heartache and hilarity, Yellowcake is a moving story of how everyday people sort their way through life, with all its hidden hazards.

Ann Cummins is a graduate of the Johns Hopkins University and the University of Arizona writing programs. She is the author of Red Ant House, a San Francisco Chronicle bestseller and Best Book of the Year. She has had her stories published in The New Yorker, McSweeney’s, Quarterly West, and the Sonora Review, among other publications, as well as The Best American Short Stories 2002. The recipient of a Lannan fellowship, she divides her time between Oakland, California, where she lives with her husband, and Flagstaff, Arizona, where she teaches creative writing at Northern Arizona University.