A Brief History of Equality (Hardcover) 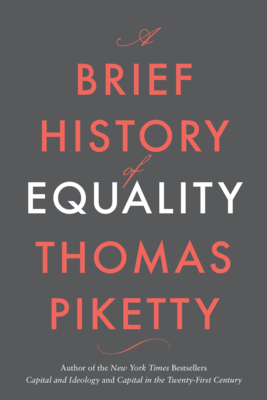 A Brief History of Equality (Hardcover)

"An opportunity for readers to see Piketty bring his larger argument about the origins of inequality and his program for fighting it into high relief."
--Nicholas Lemann, New York Times The world's leading economist of inequality presents a short but sweeping and surprisingly optimistic history of human progress toward equality despite crises, disasters, and backsliding. A perfect introduction to the ideas developed in his monumental earlier books. It's easy to be pessimistic about inequality. We know it has increased dramatically in many parts of the world over the past two generations. No one has done more to reveal the problem than Thomas Piketty. Now, in this surprising and powerful new work, Piketty reminds us that the grand sweep of history gives us reasons to be optimistic. Over the centuries, he shows, we have been moving toward greater equality. Piketty guides us with elegance and concision through the great movements that have made the modern world for better and worse: the growth of capitalism, revolutions, imperialism, slavery, wars, and the building of the welfare state. It's a history of violence and social struggle, punctuated by regression and disaster. But through it all, Piketty shows, human societies have moved fitfully toward a more just distribution of income and assets, a reduction of racial and gender inequalities, and greater access to health care, education, and the rights of citizenship. Our rough march forward is political and ideological, an endless fight against injustice. To keep moving, Piketty argues, we need to learn and commit to what works, to institutional, legal, social, fiscal, and educational systems that can make equality a lasting reality. At the same time, we need to resist historical amnesia and the temptations of cultural separatism and intellectual compartmentalization. At stake is the quality of life for billions of people. We know we can do better, Piketty concludes. The past shows us how. The future is up to us.