The Party and the People: Chinese Politics in the 21st Century (Hardcover) 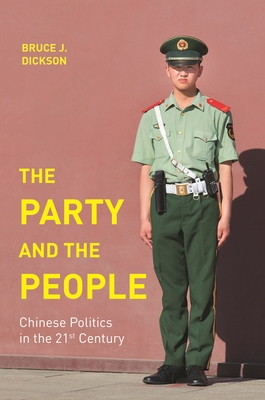 The Party and the People: Chinese Politics in the 21st Century (Hardcover)

Since 1949, the Chinese Communist Party (CCP) has maintained unrivaled control over the country, persisting even in the face of economic calamity, widespread social upheaval, and violence against its own people. Yet the party does not sustain dominance through repressive tactics alone--it pairs this with surprising responsiveness to the public. The Party and the People explores how this paradox has helped the CCP endure for decades, and how this balance has shifted increasingly toward repression under the rule of President Xi Jinping. Delving into the tenuous binary of repression and responsivity, Bruce Dickson illuminates numerous questions surrounding the CCP's rule: How does it choose leaders and create policies? When does it allow protests? Will China become democratic? Dickson shows that the party's dual approach lies at the core of its practices--repression when dealing with existential, political threats or challenges to its authority, and responsiveness when confronting localized economic or social unrest. The state answers favorably to the demands of protesters on certain issues, such as local environmental hazards and healthcare, but deals harshly with others, such as protests in Tibet, Xinjiang, or Hong Kong. With the CCP's greater reliance on suppression since Xi Jinping's rise to power in 2012, Dickson considers the ways that this tipping of the scales will influence China's future. Bringing together a vast body of sources, The Party and the People sheds new light on how the relationship between the Chinese state and its citizens shapes governance.
Bruce J. Dickson is professor of political science and international affairs and chair of the Department of Political Science at George Washington University. His many books include The Dictator's Dilemma and Allies of the State. He lives in Vienna, Virginia.