Cogs and Monsters: What Economics Is, and What It Should Be (Hardcover) 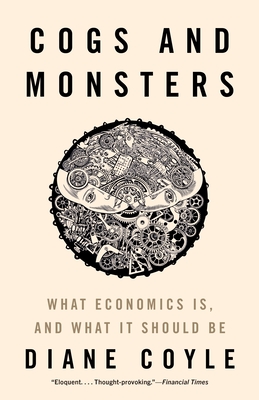 Cogs and Monsters: What Economics Is, and What It Should Be (Hardcover)

Digital technology, big data, big tech, machine learning, and AI are revolutionizing both the tools of economics and the phenomena it seeks to measure, understand, and shape. In Cogs and Monsters, Diane Coyle explores the enormous problems--but also opportunities--facing economics today and examines what it must do to help policymakers solve the world's crises, from pandemic recovery and inequality to slow growth and the climate emergency. Mainstream economics, Coyle says, still assumes people are "cogs"--self-interested, calculating, independent agents interacting in defined contexts. But the digital economy is much more characterized by "monsters"--untethered, snowballing, and socially influenced unknowns. What is worse, by treating people as cogs, economics is creating its own monsters, leaving itself without the tools to understand the new problems it faces. In response, Coyle asks whether economic individualism is still valid in the digital economy, whether we need to measure growth and progress in new ways, and whether economics can ever be objective, since it influences what it analyzes. Just as important, the discipline needs to correct its striking lack of diversity and inclusion if it is to be able to offer new solutions to new problems. Filled with original insights, Cogs and Monsters offers a road map for how economics can adapt to the rewiring of society, including by digital technologies, and realize its potential to play a hugely positive role in the twenty-first century.
Diane Coyle is the Bennett Professor of Public Policy at the University of Cambridge. Her books include GDP: A Brief but Affectionate History, The Economics of Enough: How to Run the Economy as If the Future Matters, and The Soulful Science: What Economists Really Do and Why It Matters (all Princeton). She lives in London. Twitter @DianeCoyle1859