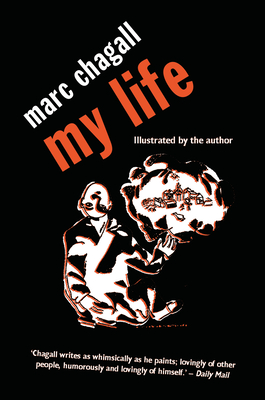 
Email or call for price.
Marc Chagall's strange, vibrant, and poetic autobiographical essay on his early life, containing illustrations, has established itself as a unique document in 20th-century literature

Completed by the artist in 1922, this memoir became available in English in 1965 when Peter Owen published this translation, and it has remained in print ever since. Lyrical and evocative, it is a key work in Chagall studies for the light it sheds on the shaping of the artist’s creative genius. His deep roots in Jewish tradition—religious and secular—are reflected in these recollections of his poverty-stricken youth from Witebsk, White Russia, to the Parisian art world. Together, his words and pictures paint an incomparable portrait of one of the greatest artists of this century, and of the now vanished milieu that inspired him.
Marc Chagall (1887–1985) was a pioneer of modernism and one of the greatest figurative artists of the 20th century.
"A lively account of the artist's early life and artistic development. . . . Fun to read even for total newcomers to Chagall's work."  —Midwest Book Review

"Chagall writes as whimsically as he paints; lovingly of other people, humorously and lovingly of himself."  —Daily Mail

"Anyone who likes Chagall’s paintings will enjoy this book: the work of an unteachable, unspoiled folk artist."  —Evening Standard