The Narrow Corridor: States, Societies, and the Fate of Liberty (Hardcover) 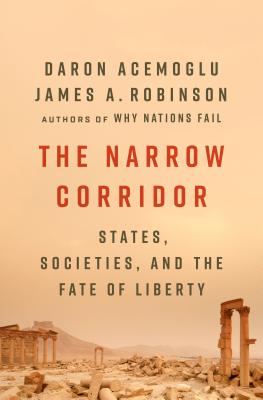 The Narrow Corridor: States, Societies, and the Fate of Liberty (Hardcover)

By Daron Acemoglu, James A. Robinson


Email or call for price.
From the authors of the international bestseller Why Nations Fail, a crucial new big-picture framework that answers the question of how liberty flourishes in some states but falls to authoritarianism or anarchy in others--and explains how it can continue to thrive despite new threats.

In Why Nations Fail, Daron Acemoglu and James A. Robinson argued that countries rise and fall based not on culture, geography, or chance, but on the power of their institutions. In their new book, they build a new theory about liberty and how to achieve it, drawing a wealth of evidence from both current affairs and disparate threads of world history.

Liberty is hardly the "natural" order of things. In most places and at most times, the strong have dominated the weak and human freedom has been quashed by force or by customs and norms. Either states have been too weak to protect individuals from these threats, or states have been too strong for people to protect themselves from despotism. Liberty emerges only when a delicate and precarious balance is struck between state and society.

There is a Western myth that political liberty is a durable construct, arrived at by a process of "enlightenment." This static view is a fantasy, the authors argue. In reality, the corridor to liberty is narrow and stays open only via a fundamental and incessant struggle between state and society: The authors look to the American Civil Rights Movement, Europe’s early and recent history, the Zapotec civilization circa 500 BCE, and Lagos’s efforts to uproot corruption and institute government accountability to illustrate what it takes to get and stay in the corridor. But they also examine Chinese imperial history, colonialism in the Pacific, India’s caste system, Saudi Arabia’s suffocating cage of norms, and the “Paper Leviathan” of many Latin American and African nations to show how countries can drift away from it, and explain the feedback loops that make liberty harder to achieve.

Today we are in the midst of a time of wrenching destabilization. We need liberty more than ever, and yet the corridor to liberty is becoming narrower and more treacherous. The danger on the horizon is not "just" the loss of our political freedom, however grim that is in itself; it is also the disintegration of the prosperity and safety that critically depend on liberty. The opposite of the corridor of liberty is the road to ruin.
Daron Acemoglu is an Institute Professor at MIT. In 2005 he received the John Bates Clark Medal, given to economists under age forty judged to have made the most significant contribution to economic thought and knowledge; in 2012 he was awarded the Erwin Plein Nemmers Prize in Economics for work of lasting significance; and in 2016 he received the BBVA Frontiers of Knowledge Award in Economics, Finance, and Management for his lifetime contributions.

James A. Robinson, a political scientist and economist, is one of nine University Professors at the University of Chicago. Focused on Latin America and Africa, he is currently conducting research in Bolivia, the Democratic Republic of the Congo, Sierra Leone, Haiti, and Colombia, where he has taught for many years during the summer at the University of the Andes in Bogotá.

“What explains the rise and fall of democracy and dictatorship? . . . [Acemoglu and Robinson] offer a provocative framework for analyzing our current moment of democratic crisis. . . . A powerful starting point for understanding the many perils facing aspirations for democracy and liberty today. . . helpfully recalibrates our American tendency to collapse debates over freedom into a binary clash between the narrow liberty of ‘free markets’ on the one hand, and the economic and political freedoms provided by social-democratic ‘big government’ on the other.” —The Washington Post

“Crucially and rightly, the book does not see freedom as merely the absence of state oppression . . . This book is more original and exciting than its predecessor. It has gone beyond the focus on institutions to one on how a state really works.” —Martin Wolf, Financial Times

“A work of staggering ambition—aiming to explain why liberty has or has not existed at every moment in time in every geography in the world… It is chock full of delightful detours and brilliant nuggets... Smart and timely.” —Newsweek

“The Narrow Corridor takes us on a fascinating journey, across continents and through human history, to discover the critical ingredient of liberty. In these times, there can be no more important search—nor any more important book.” —George Akerlof, Nobel laureate in economics, 2001

“Liberty does not come easily. Many populations suffer from ineffective governments and are stuck in a cage of norms and traditions. Others are subdued by a despotic Leviathan. In this highly original and gratifying fresco, Daron Acemoglu and Jim Robinson take us on a journey through civilizations across time and space. A remarkable achievement that only they could pull off and that seems destined to repeat the stellar performance of Why Nations Fail.” —Jean Tirole, Toulouse School of Economics, Nobel laureate in economics, 2014

“With gripping examples of civilizations that thrived or failed, Acemoglu and Robinson provide an exhilarating analysis of the critical balance needed between state and society. The Narrow Corridor is destined to be the landmark book that maps the future of freedom for any serious policymaker, scholar, or citizen.” —Erik Brynjolfsson, coauthor of The Second Machine Age

“One of the biggest paradoxes of political history is the trend, over the last 10,000 years, away from small tribes and toward the development of the strong centralized states that allow societies of millions to function. But—how can a powerful state be reconciled with liberty for its citizens? This great book provides an answer to this fundamental dilemma. You will find it as enjoyable as it is thought-provoking.” —Jared Diamond, professor of geography at UCLA and Pulitzer Prize–winning author of Guns, Germs, and Steel

“How should we view the current challenges facing our democracies? This brilliant, timely book offers a simple, powerful framework for assessing alternative forms of social governance. The analysis is a reminder that it takes vigilance to maintain a proper balance between the state and society—to stay in the ‘narrow corridor’—and avoid falling into either statelessness or dictatorship.” —Bengt Holmstrom, Nobel laureate in economics, 2016

“Two of the world’s best social scientists have written a magisterial book of immense insight and learning, a true tour de force. From its rich historical study of the delicate balance between state and society it draws a chilling conclusion every thinking person should be aware of: Liberty is as rare as it is fragile, wedged uneasily between tyranny and anarchy.” —Joel Mokyr, author of A Culture of Growth

“Another outstanding, insightful book by Acemoglu and Robinson on the importance and difficulty of getting and maintaining a successful democratic state. Packed with examples and analysis, it is a pleasure to read.” —Peter Diamond, Nobel Laureate in Economics, 2010


Praise for Why Nations Fail

“Bracing, garrulous, wildly ambitious and ultimately hopeful. It may, in fact, be a bit of a masterpiece.” —The Washington Post

“Why Nations Fail is a splendid piece of scholarship and a showcase of economic rigor.” —The Wall Street Journal

“This is an intellectually rich book that develops an important thesis with verve. It should be widely read.” —Financial Times

“Why Nations Fail is a truly awesome book.” —Steven Levitt, coauthor of Freakonomics