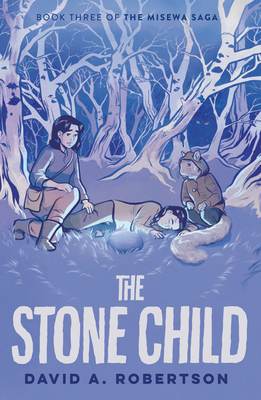 By David A. Robertson

This is book number 3 in the The Misewa Saga series.

It's a race against time to save Eli, in this third book in the award-winning, Narnia-inspired Indigenous middle-grade fantasy series.

After discovering a near-lifeless Eli at the base of the Great Tree, Morgan knows she doesn't have much time to save him. And it will mean asking for help — from friends old and new. Racing against the clock, and with Arik and Emily at her side, Morgan sets off to follow the trail away from the Great Tree to find Eli's soul before it's too late. As they journey deep into the northern woods, a place they've been warned never to enter, they face new challenges and life-threatening attacks from strange and horrifying creatures. But a surprise ally comes to their aid, and Morgan finds the strength to focus on what's most important: saving her brother's life.
DAVID A. ROBERTSON is the author of numerous books for young readers including When We Were Alone, which won the 2017 Governor General's Literary Award. The Barren Grounds, the first book in the middle-grade The Misewa Saga series, received a starred review from Kirkus and was a Kirkus and Quill & Quire best middle-grade book of 2020, as well as a USBBY and Texas Lone Star selection, and nominated for the Ontario Library Association’s Silver Birch Award. A sought-after speaker and educator, as well as recent recipient of the Writers' Union of Canada's Freedom to Read Award, Dave is a member of the Norway House Cree Nation and currently lives in Winnipeg. For more information, visit his website: www.darobertson.ca and follow him on Twitter: @DaveAlexRoberts
An Indigo Best Kids' Book of 2022

"For a combination of adventure, time travel and Indigenous culture, few series will challenge the Misewa Saga . . . Robertson weaves a tale that is part myth, part fantasy and wholly intriguing." —Winnipeg Free Press

“Robertson has a lot of narrative balls in the air . . . but the story’s emotional arc shines true.” —Kirkus Reviews

"Girl power is front and center in the latest Misewa adventure . . . there's a lot of urgency, a lot of action, a lot of emotion as events include satisfying reunions and heartbreaking loss." —Common Sense Media

"As readers, we were able to learn a lot about Cree culture in a way that's not achievable through textbooks . . . these books would be a great addition to any classroom library." —The Suburban