Breaking Into the Current: Boatwomen of the Grand Canyon (Paperback) 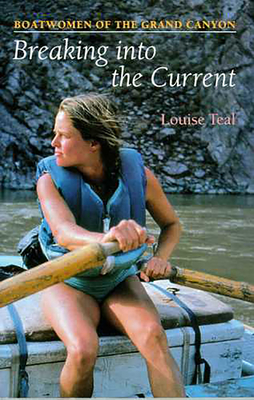 Breaking Into the Current: Boatwomen of the Grand Canyon (Paperback)


On Our Shelves Now
In 1973, Marilyn Sayre gave up her job as a computer programmer and became the first woman in twenty years to run a commercial boat through the Grand Canyon. Georgie White had been the first, back in the 1950s, but it took time before other women broke into guiding passengers down the Colorado River. This book profiles eleven of the first full-season Grand Canyon boatwomen, weaving together their various experiences in their own words.

Breaking Into the Current is a story of romance between women and a place. Each woman tells a part of every Canyon boatwoman's story: when Marilyn Sayre talks about leaving the Canyon, when Ellen Tibbets speaks of crew camaraderie, or when Martha Clark recalls the thrill of white water, each tells how all were involved in the same romance.

All the boatwomen have stories to tell of how they first came to the Canyon and why they stayed. Some speak of how they balanced their passion for being in the Canyon against the frustration of working in a traditionally male-oriented occupation, where today women account for about fifteen percent of the Canyon's commercial river guides.

As river guides in love with the Canyon and their work, these women have followed their hearts. "I've done a lot," says Becca Lawton, "but there's been nothing like holding those oars in my hands and putting my boat exactly where I wanted it. Nothing."
Louise Teal is a writer who has been published in Arizona Highways, Backpacker, and Mountain Bike magazines. Teal writers about these boatwomen because she’s one of them. She began working as a swamper (assistant motor boatman, as they called it) in 1972. She started rowing commercially in the Grand Canyon in 1974, and in 1978, she led the first all-women’s Grand Canyon trip. The next year she worked as the first woman river ranger for Grand Canyon’s National Park Service. This summer, as she’s done every summer for the last twenty-plus years, she will be back on the river.

"An engaging chronicle of a little-known group of pioneers."—Publishers Weekly

"An inspiring and necessary reminder that women are thriving in the world of outdoor adventure." —Sojourner

"A thoroughly enjoyable read." —Books of the Southwest

"The greatest virtue of the book is Teal's literary gift. . . . A fully rounded view of the adrenaline-fueled life on the big water." —Utah Historical Quarterly

"The book transcends gender even as it addresses it and thereby joins the dozen or so books about the Grand Canyon that belong in every river runner's library. . . . Without it, history is incomplete." —Paddler