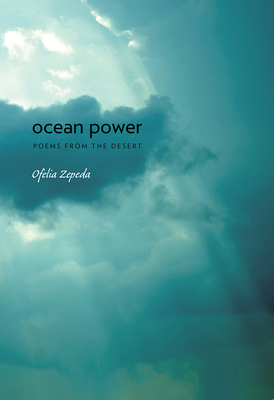 This is book number 32 in the Sun Tracks series.

The annual seasons and rhythms of the desert are a dance of clouds, wind, rain, and flood—water in it roles from bringer of food to destroyer of life. The critical importance of weather and climate to native desert peoples is reflected with grace and power in this personal collection of poems, the first written creative work by an individual in O'odham and a landmark in Native American literature.

Poet Ofelia Zepeda centers these poems on her own experiences growing up in a Tohono O'odham family, where desert climate profoundly influenced daily life, and on her perceptions as a contemporary Tohono O'odham woman. One section of poems deals with contemporary life, personal history, and the meeting of old and new ways. Another section deals with winter and human responses to light and air. The final group of poems focuses on the nature of women, the ocean, and the way the past relationship of the O'odham with the ocean may still inform present day experience. These fine poems will give the outside reader a rich insight into the daily life of the Tohono O'odham people.
"A fine first volume of quietly powerful poems that reflect the oral traditions of her Tohono O'odham people." —Western American Literature

"A fresh look at the desert from the perspective of people that adapted to that land over many centuries . . . Zepeda frequently constructs evocative images of life in the desert that are seldom seen." —Visions Magazine

"Zepeda's imagery captures the most subtle perceptions of the natural world-the smell of coming rain, the taste of dust-and her poems, deriving from tribal, family, and personal memories, reveal an intense and characteristically Tohono consciousness of weather, sky, earth, and water, of the landmarks which measure the passage of the seasons, and of nature in both its positive and negative manifestations." —World Literature Today

"Her poems let us glimpse the Pimería Alta from an O'odham point of view. The desert is achingly palpable here." —Southwest Mission Research Center