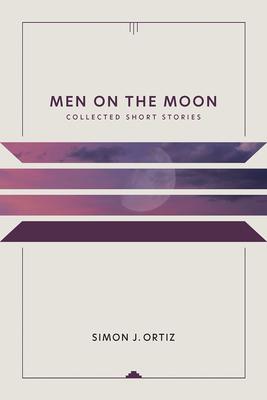 This is book number 37 in the Sun Tracks series.

When Faustin, the old Acoma, is given his first television set, he considers it a technical wonder, a box full of mystery. What he sees on its screen that first day, however, is even more startling than the television itself: men have landed on the moon. Can this be real? For Simon Ortiz, Faustin's reaction proves that tales of ordinary occurrences can truly touch the heart. "For me," he observes, "there's never been a conscious moment without story."

Best known for his poetry, Ortiz also has authored 26 short stories that have won the hearts of readers through the years. Men on the Moon brings these stories together—stories filled with memorable characters, written with love by a keen observer and interpreter of his people's community and culture. True to Native American tradition, these tales possess the immediacy—and intimacy—of stories conveyed orally. They are drawn from Ortiz's Acoma Pueblo experience but focus on situations common to Native people, whether living on the land or in cities, and on the issues that affect their lives. We meet Jimmo, a young boy learning that his father is being hunted for murder, and Kaiser, the draft refuser who always wears the suit he was given when he left prison. We also meet some curious Anglos: radicals supporting Indian causes, scholars studying Indian ways, and San Francisco hippies who want to become Indians too.

Whether telling of migrants working potato fields in Idaho and pining for their Arizona home or of a father teaching his son to fly a kite, Ortiz takes readers to the heart of storytelling. Men on the Moon shows that stories told by a poet especially resound with beauty and depth.
Poet, fiction writer, essayist, and storyteller Simon Ortiz is a native of Acoma Pueblo and is the author of numerous books.
"The language of these rich narratives reflect both Ortiz's poetic gift and his intimate knowledge of oral storytelling" —Publishers Weekly

"Informed by a vision of Native American reclamation, Ortiz's writing is always political, usually humorous, at times poignant. . . . These collected stories are ample evidence that Ortiz is not only an accomplished Acoma poet but also a skilled writer of short fiction." —Western American Literature

“Each of Ortiz's powerfully tender stories weaves the tragic with the transcendent, the absurd with the cosmic, whether it focuses on work or family, happiness or heartache, the laws of nature or of society, loyalty or love.” —Donna Seaman, Booklist