Out There Somewhere (Sun Tracks #49) (Paperback) 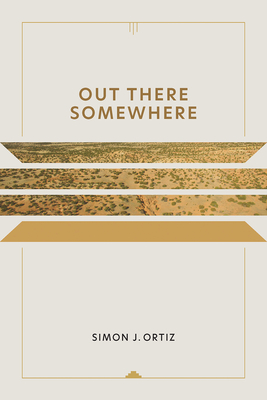 Out There Somewhere (Sun Tracks #49) (Paperback)

This is book number 49 in the Sun Tracks series.

He has been out there somewhere for a while now, a poet at large in America.

Simon Ortiz, one of our finest living poets, has been a witness, participant, and observer of interactions between the Euro-American cultural world and that of his Native American people for many years. In this collection of haunting new work, he confronts moments and instances of his personal past—and finds redemption in the wellspring of his culture.

A writer known for deeply personal poetry, Ortiz has produced perhaps his most personal work to date. In a collage of journal entries, free-verse poems, and renderings of poems in the Acoma language, he draws on life experiences over the past ten years—recalling time spent in academic conferences and writers' colonies, jails and detox centers—to convey something of the personal and cultural history of dislocation. As an American Indian artist living at times on the margins of mainstream culture, Ortiz has much to tell about the trials of alcoholism, poverty, displacement. But in the telling he affirms the strength of Native culture even under the most adverse conditions and confirms the sustaining power of Native beliefs and connections: "With our hands, we know the sacred earth. / With our spirits, we know the sacred sky."

Like many of his fellow Native Americans, Ortiz has been "out there somewhere"—Portland and San Francisco, Freiburg, Germany, and Martinique—away from his original homeland, culture, and community. Yet, as these works show, he continues to be absolutely connected socially and culturally to Native identity: "We insist that we as human cultural beings must always have this connection," he writes, "because it is the way we maintain a Native sense of existence." Drawing on this storehouse of places, times, and events, Out There Somewhere is a rich fusion taking readers into the heart and soul of one of today's most exciting and original American poets.

Poet, fiction writer, essayist, and storyteller Simon Ortiz is a native of Acoma Pueblo and is the author of numerous books.
"Ortiz expresses anger and despair in poems that nonetheless are permeated by gentleness and in which silence is every bit as eloquent as words. His meticulous use of repetition and rhythm ensures that the reader feels the pulse of his words and therefore understands them with more than mere intellect." —Booklist

"Although his words often seem innocent, the observations he makes could only come from one who has known the harshness of the experience. . . . This work ultimately shows us those moments of heightened awareness in which we finally know why we say yes to the private journeys we take through our various geographies and landscapes." —Southwest Book Views

"An accomplished veteran poet at the height of his powers. . . . Ortiz's extraordinary command of his material and authority of voice makes Out There Somewhere a major work. His personal engagement with a state of exile in the larger culture, of being Acoma, is compelling and energetic." —MultiCultural Review

"As always, Ortiz's work is beautiful, profound in its simplicity and sincerity." —North American Review