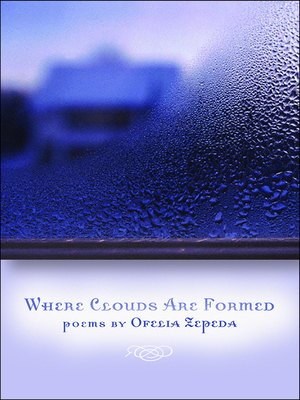 This is book number 63 in the Sun Tracks series.

Ofelia Zepeda is a Native American poet who possesses a kind of double vision. She sees the contemporary world through her own highly observant eyes and, at the same time, through the eyes of her Tohono O’odham ancestors. Seeing this way infuses her poetry with a resonance and depth that makes it a delight to read—and re-read.

Zepeda is as clear-eyed about the past as she is about the present. She recalls waiting for the school bus on a cold morning inside her father’s truck, listening to the sounds of the engine, the windshield wipers, and the “soft rain on the hood.” She remembers celebrating Mass on the “cold dirt floor of the Winter Solstice.” In the present, she sees both the frustration and the humor in a woman she observes trying to eat pancakes with one hand while her other resides in a cast: “Watching her, I realize eating pancakes is a two-handed job.”

Whatever she sees, she filters through her second set of eyes, which keep the past always present. She tells of traveling to Waw Giwulig, the most sacred mountain of the Tohono O’odham, to ask for blessings—and forgiveness. She writes that one should always bring music to the mountains, “so they are generous with the summer rains.” And, still, “the scent of burning wood / holds the strongest memory. / Mesquite, cedar, piñon, juniper, . . . / we catch the scent of burning wood; / we are brought home.” It is a joy to see the world afresh through her eyes.

"In poem after poem, she invokes realities that her language expresses but English resists. In one of the most moving poems, Zepeda describes how she lacks a birth certificate because 'my parents are illiterate in the English language. . . . they speak a language much too civil for writing,' a language 'useful for praying with the earth and sky.' The connection between religion and language runs throughout the poems, as does the linkage between the land’s features and the Tohono O’odham tongue. Miraculously, Zepeda makes us hear echoes of her language through English—no small poetic feat." —Booklist

“Zepeda takes readers into a realm where mystery and history combine, where past and present merge for the reader in a perplexing and simple elation of word and spirit.” —Southwestern American Literature