What Has Passed and What Remains: Oral Histories of Northern Arizona's Changing Landscapes (Paperback) 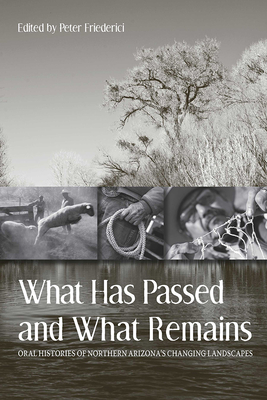 What Has Passed and What Remains: Oral Histories of Northern Arizona's Changing Landscapes (Paperback)


On Our Shelves Now
Ferrell Secakuku remembers the ancient farming rites of his Hopi people but saw them replaced by a cash economy. Sheep rancher Joe Manterola recalls watching hard scrabble farms on what is now tree-studded grassland on Garland Prairie. Navajo Rose Gishie once saw freshly dug holes fill with clean, drinkable water where none rises today. All over northern Arizona, people have seen the landscapes change, and livelihoods with them. In this remarkable book they share their stories.

The book is a product of Northern Arizona University’s Ecological Oral Histories project, which has been collecting remembrances of long-time area residents who have observed changes to the land from the 1930s to the present day. It carves a wide swath, from the Arizona Strip to the Mogollon Rim, from valleys near Prescott to the New Mexico line. It takes readers to the Bar Heart Ranch north of Williams and to the Doy Reidhead Ranch southeast of Holbrook, to the forests of Flagstaff and the mesas of Indian country.

Enhanced with more than fifty illustrations, this book brings environmental change down to earth by allowing us to see it through the eyes of those whose lives it has directly touched. What Has Passed and What Remains is a window on the past that carries important lessons for the future.
Peter Friederici is an assistant professor of journalism at Northern Arizona University and editor of “Earth Notes” for KNAU/Arizona Public Radio.
“Friederici’s book is an important contribution to the environmental and historical literature of northern Arizona. It is essential reading for anyone seeking to find something of the real West and the real Arizona under the increasingly thick layers of civilization that cover them up. And for anyone who wonders how it was that people survived out here in the days before air conditioning and interstate highways.” —Gregory McNamee, author of Monumental Places: National Parks and Monuments in the Grand Canyon State