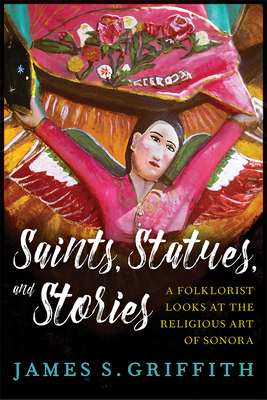 
On Our Shelves Now
. . . we move to the town of Aconchi on the Río Sonora, where the mission church once contained a life-sized crucifix with a black corpus, known both as Nuestro Señor de Esquipulas . . . and El Cristo Negro de Aconchi . . .

So describes well-known and beloved folklorist James S. Griffith as he takes us back through the decades to a town in northern Sonora where a statue is saved—and in so doing, a community is saved as well.

In Saints, Statues, and Stories Griffith shares stories of nearly sixty years of traveling through Sonora. As we have come to expect through these journeys, “Big Jim”—as he is affectionately known by many—offers nothing less than the living traditions of Catholic communities. Themes of saints as agents of protection or community action are common throughout Sonora: a saint coming out of the church to protect the village, a statue having a say in where it resides and paying social calls to other communities, or a beloved image rescued from destruction and then revered on a private altar. A patron saint saves a village from outside attackers in one story—a story that has at least ten parallels in Sonora’s former mission communities. Details may vary, but the general narrative remains the same: when hostile nonbelievers attack the village, the patron saint of the church foils them.

Griffith uncovers the meanings behind the devotional uses of religious art from a variety of perspectives—from artist to audience, preservationist to community member. The religious artworks transcend art objects, Griffith believes, and function as ways of communicating between this world and the next. Setting the stage with a brief geography, Griffith introduces us to roadside shrines, artists, fiestas, saints, and miracles. Full-color images add to the pleasure of this delightful journey through the churches and towns of Sonora.
James S. Griffith is the former director of the Southwest Folklore Center at the University of Arizona, where he earned his PhD in cultural anthropology and art history. He has published numerous books, including A Border Runs Through It: Journeys in Regional History and Folklore.

“Griffith recognizes the interdependence that has grown between the Tucsonese culture and its folk arts traditions.”—High Country News

“Like a friend or relative who is eager to introduce visitors to the sights and sounds of his hometown, Griffith leads readers on a whirlwind tour celebrating Mexicano arts and crafts.”—Western Folklore

“Griffith is a superb guide. Everything he writes is a reflection of his own passionate feelings of respect, as well as his ability to observe and interpret minutiae. Thus he encourages us to discover each other and, in turn, ourselves.”—Journal of Arizona History

“After nearly thirty years of intense personal interest and residence in ‘the land of the Pimas,’ Griffith chooses places and traditions that have especially strong connections to myth/folklore and lays out for us in good, clean prose his personal account of them.”—Books of the Southwest

“Griffith writes of the beliefs and customs of people far different from himself in a spirit of restraint and simple decency.”—New York Times Book Review

“It is a testimony to the unheralded aspects of historical traditions that shape our interpretations of the past and that will link the shadowy present to an even more mysterious future. Griffith correctly identifies spirituality as the key link between people and places, between man and the land, and ultimately between man and God.”—Catholic Historical Review