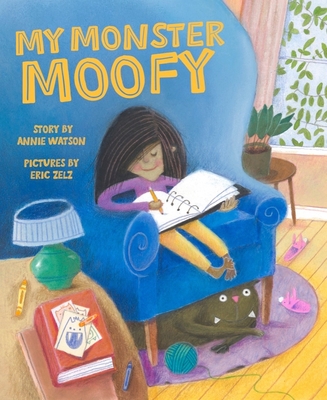 There’s a monster under my bed who changes like a chameleon. He can be motionless like a rock with a tail, or he can strike with blinding speed, like a lightning bolt with claws. My monster’s name is Moofy. His ears are as pointy as tortilla chips. His tongue is as pink as bubblegum, and his teeth are as sharp as swords. By day, Moofy is a fur rug in the sunshine. By night, he’s a pair of glowing headlights in the darkness.

Personifications, idioms, hyperboles, allusions, and much more lie ahead. But this isn’t a writing guide, it’s a picture book story about a little monster who oozes personality. The first pages leave us guessing, but kids will soon figure out, to their delight, that Moofy’s a cat. And what else could this furball of mischief be?

Fun is the order of the day, but an unobtrusive banner on each page lets interested readers know which figure of speech is being featured. This is a book a young reader and future writer can grow with.

Annie Watson  is an Assistant Professor of Education at Northern Arizona University and prior to that was a high school English teacher for nine years. She is the author of Is 2 A Lot?, and when not teaching or writing enjoys exploring the outdoors with her husband and two children.

Eric Zelz is a designer, illustrator, and educator whose work has been recognized by organizations including the Society of Environmental Journalists and the Society of News Design. His illustrations for three Tilbury House picture books (Pass the Pandowdy, Please; Read This Book If You Don’t Want a Story; and My Monster Moofy) have received awards and starred reviews. See more at ericzelz.com.
Kirkus Starred Review -- Moofy, the monster who lives under the unnamed protagonist’s bed, is a complex creature of many, many talents.He has quick reflexes and is a master of disguise. Despite his fearsome, sword-sharp teeth, he can also be silly, resembling a rug more than a monster. Moofy also has a softer side. He loves to help make muffins, to read books, and to gaze at the moon. Moofy’s tendency to create chaos does not deter his adoring fans, who shower him with attention and high-fives. Moofy, it turns out, is not just any monster: He is the protagonist’s cat—and their best friend. The cleverly over-the-top text utilizes a variety of literary devices to describe Moofy’s colorful life and personality, organically and effectively introducing young children to concepts like metaphor, simile, alliteration, allusion, hyperbole, and rhyme. The protagonist is endearing, and their affectionate perspective renders Moofy’s antics delightful to behold. The watercolor illustrations, which utilize a gentle pastel palette, perfectly complement the text: Each picture shows a few more details about Moofy, helping readers realize that Moofy is actually a cat. The protagonist is depicted with beige skin and dark, straight hair. The examples of each device are clear, accurate, and child friendly, making this book an excellent resource for an elementary language-arts classroom or an ideal gift for a young, budding writer. A delightful picture-book introduction to poetic devices. (glossary) (Picture book. 4-8)

The lists and definitions of figures of speech (alliteration, metaphor, allusion, onomatopoeia, etc.) traditionally distributed in English classrooms have felt burdensome for generations, so one appreciates Watson’s desire to enliven the lesson. Third or fourth graders, already deep into writing, may appreciate this book most.
— Naomi Shihab Nye - New York Times Book Review

Humor and instruction are the watchwords with “My Monster Moofy,” an illustrated primer. Comic scenes show a girl and her fluffy pet monster exemplifying 17 literary devices. The pace is swift. As an adjunct to other reading, the book should help children develop some sensitivity to linguistic devices and be better able to notice them in the wild.
— Meghan Cox Gurdon - Wall Street Journal

If I gave out stars, this savvy picture book would get many stars. Besides being a humorously illustrated mystery about what sort of monster Moofy might be, it illustrates 17 literary devices — figures of speech — from simile and metaphor to paradox and pun. It's effectively a junior high grammar cheat sheet translated for first-graders and really quite deftly done.
— Celia Storey - Arkansas Democrat-Gazette