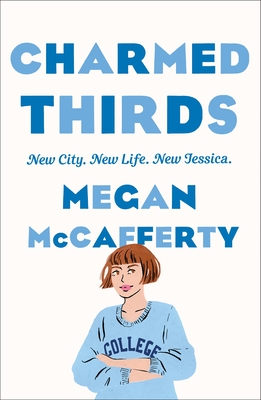 This is book number 3 in the Jessica Darling series.

Life finally seems to be going right for Jessica Darling. She escaped the New Jersey suburbs and attends Columbia University in New York City. She’s more into her boyfriend, Marcus Flutie, than ever—even if he’s at a college across the country in California. And she’s making new friends who can’t quite compete with her beloved bestie, Hope, but at least come close.

If Jessica thought high school was hard, college brings a whole new set of challenges. She snagged an internship at a Brooklyn literary magazine, but will she ever fit in with the snarky staff? Can she even make it to graduation after her parents cut her off financially? And will her long distance relationship survive the pursuit by three new—and radically different—love interests?

With the signature wit, cynicism and candor the series is famous for, Charmed Thirds takes readers on an unforgettable journey through Jessica Darling's hilariously complicated college years.

MEGAN MCCAFFERTY writes fiction for tweens, teens and teens-at-heart of all ages. The author of over a dozen novels, she’s best known for Sloppy Firsts and four more books in the New York Times bestselling Jessica Darling series. Described in her first review as “Judy Blume meets Dorothy Parker” (Wall Street Journal), she’s been trying to live up to that high standard ever since.

Rebecca Serle is the New York Times bestselling author of One Italian Summer, In Five Years, The Dinner List, and the young adult novels The Edge of Falling and When You Were Mine. Serle also developed the hit TV adaptation Famous in Love, based on her YA series of the same name. She is a graduate of USC and The New School and lives in Los Angeles.

Praise for the Jessica Darling series:

"Alongside Meg Cabot’s novels and the Gossip Girl series, I can’t think of a series more formative to the turn of the millennium YA!" —Book Riot

"Jessica's an original, but her problems are universal, and McCafferty is formidably adept at channeling her self-deprecating, wise-guy voice. If you don't see yourself in Jessica Darling, you're not looking hard enough." - Chicago Tribune

“McCafferty looks at travails with humor as well as heart.” —People

"Jessica is a captivating, intelligent, acidly funny-but always believably adolescent-narrator who is unsparing in her sketches of Pineville High 'society' yet touchingly alive to her own vulnerabilities." —Publisher's Weekly

“Such a sharp, funny, poignant heroine, with an inner world we can all relate to. I love it.” —Sophie Kinsella, author of the New York Times bestselling Shopaholic series

"A witty, biting, and altogether true accounting of a girl’s journey to young womanhood, complete with all of the cringe-inducing, hilarious moments of love, shame, and uncertainty that readers will remember from their own lives.” —Jennifer Weiner, author of Goodnight Nobody and Good in Bed