Burning Girls and Other Stories (Paperback) 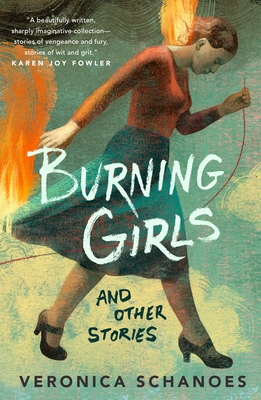 Burning Girls and Other Stories (Paperback)

When we came to America, we brought anger and socialism and hunger. We also brought our demons.

“One of the most powerful voices in speculative fiction.”—Catherynne M. Valente

In Burning Girls and Other Stories, Veronica Schanoes crosses borders and genres with stories of fierce women at the margins of society burning their way toward the center. This debut collection introduces readers to a fantasist in the vein of Karen Russell and Kelly Link, with a voice all her own.

Emma Goldman--yes, that Emma Goldman--takes tea with Baba Yaga and truths unfold inside of exquisitely crafted lies. In "Among the Thorns," a young woman in seventeenth century Germany is intent on avenging the brutal murder of her peddler father, but discovers that vengeance may consume all that it touches. In the showstopping, awards-finalist title story, "Burning Girls," Schanoes invests the immigrant narrative with a fearsome fairytale quality that tells a story about America that we may not want--but need--to hear.

Dreamy, dangerous, and precise, with the weight of the very oldest tales we tell, Burning Girls and Other Stories introduces a writer pushing the boundaries of both fantasy and contemporary fiction.

With a foreword by Jane Yolen

Veronica Schanoes is an American author of fantasy stories and an associate professor in the department of English at Queens College, CUNY. Her novella Burning Girls was nominated for the Nebula Award and the World Fantasy Award and won the Shirley Jackson Award for Best Novella in 2013. She lives in New York City. Burning Girls and Other Stories is her debut collection.

“History and fairy tales are reimagined, repurposed, and remixed in this intriguing debut story collection . . . from a writer of significant talent and promise.”—Kirkus

“[A] heady mix of magic, myth, fantasy, and social commentary, from a politically left Jewish feminist perspective. . . . Schanoes’s collection is filled with girls and women burning — in rage, in fever, in passion — and fire as transformation, destruction, justice, and hope, fill these pages.”—LA Review of Books

“This is one of my most anticipated releases of 2021, period. Schanoes compiles a collection of stories about women in the margins. Fierce stories, from historical fantasy to fairytales, that take inspiration from other fantasists, such as Karen Russell and Kelly Link. Such a collection will no doubt take its place alongside some of my favorite collections of all time, such as Link’s Get In Trouble and Angela Carter’s The Bloody Chamber.”—Book Riot's 10 Speculative Short Story Collections to Enjoy in 2021

“This book is for those who like their fairy tales strong and dark. A beautifully written, sharply imaginative collection—stories of vengeance and fury, stories of wit and grit. Many pleasures and many surprises and highly recommended.”—Karen Joy Fowler

“Veronica Schanoes is one of the most powerful voices in speculative fiction and has been for a very long time. Her work effortlessly blends the modern with the archetypal. It is constantly surprising, endlessly rich, and terribly needed.”—Catherynne M. Valente

“Brilliant tales of enviable imagination, gracefully written, and with a strong feminist center. One of the best collections I’ve come across in recent years.”—Jeffrey Ford

“The tales Veronica Schanoes tells are a heady brew. She blends radicalism and fairytale, vengeance and punk and feminism with angry grieving surrealism. She is inevitable and essential.”—Roz Kaveney

“These tales are touching and haunting; their language both cutting and connecting; their female protagonists unforgettable—bleeding from thorns, pins, and needles.”—Cristina Bacchilega, author of Postmodern Fairytales: Gender and Narrative Strategies

“Veronica Schanoes' imagination and artistry are on fire in her collection. . . . She draws on the deep, untapped potential of traditional tales and classic fantasy to inspire her own unique, compelling narratives. Subtly crafted, her stories are startling in their emotional, psychological, and social resonance.”—Donald Haase, Professor Emeritus, Wayne State University

“[Mixes] startling documentary narratives with fantasy that address the plight of Jews who seek to change the world. Schanoes, a unique storyteller, is also committed to bringing about a more humane world through her original and provocative stories.”—Jack Zipes, author of Grimm Legacies:The Magic Spell of the Grimms' Folk and Fairy Tales