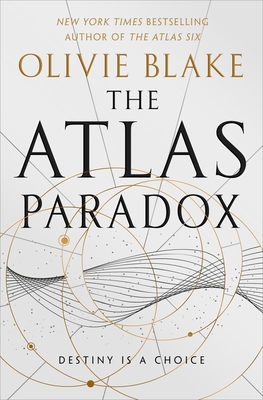 This is book number 2 in the Atlas Series series.

The Atlas Paradox is the long-awaited sequel to Olivie Blake's New York Times bestselling dark academic sensation The Atlas Six—guaranteed to have even more yearning, backstabbing, betrayal, and chaos.

Six magicians were presented with the opportunity of a lifetime.
Five are now members of the Society.
Two paths lay before them.

All must pick a side.

Alliances will be tested, hearts will be broken, and The Society of Alexandrians will be revealed for what it is: a secret society with raw, world-changing power, headed by a man whose plans to change life as we know it are already under way.

"The Atlas Six introduced six of the most devious, talented, and flawed characters to ever find themselves in a magical library, and then sets them against one another in a series of stunning betrayals and reversals. As much a delicious contest of wit, will, and passion as it is of magic...half mystery, half puzzle, and wholly a delight."—New York Times bestselling author Holly Black

Olivie Blake is the pseudonym of Alexene Farol Follmuth, a lover and writer of stories. She has penned several indie SFF projects, including the webtoon Clara and the Devil with illustrator Little Chmura and the BookTok-viral Atlas series. As Alexene, she has written a young adult rom-com, My Mechanical Romance. She lives in Los Angeles with her husband, new baby, and rescue pit bull.

PRAISE FOR THE ATLAS TRILOGY

“Lethally smart. Filled with a cast of brilliantly realized characters, each entangled with one another in torturously delicious ways, The Atlas Six will grip you by the throat and refuse to let go. Olivie Blake is a mind-blowing talent.” —Chloe Gong, New York Times bestselling author of These Violent Delights

“The Atlas Six is a fantasy novel that understands that what the people want is more dark academia stories with flawless vibes and aesthetics and hot morally fraudulent characters who are constantly on the verge of either killing each other or fucking each other. I’m the people.” —chai, book reviewer @proyearner

“Compelling, entertaining, and addictive. The Atlas Six is academic Darwinism: survival of the smartest with a healthy dose of magic.” —T. L. Huchu, author of The Library of The Dead

“This chilling story of ambition and magic will make you question your own morals as you grow to love (and hate) its fascinating, ruthless cast of characters. I utterly devoured this book.” —Amanda Foody, New York Times bestselling co-author of All of Us Villains

“The Atlas Six is dark academia with a magical twist that evokes the way graduate students are pitted against each other for limited positions (because even in the magical world there are still more people qualified to work in a library than there are library jobs).” —CrimeReads