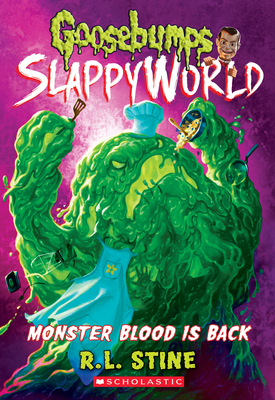 This is book number 13 in the Goosebumps SlappyWorld series.

This is Slappy's world -- you only scream in it!

Sascha Nelson and her best friend Nicole Miller love to cook! After school, they spend their time concocting new dishes in the kitchen. So when their favorite TV show Kids Big Chef Food Fights comes to their school for a special competition, they're ecstatic! But with school cheaters Ashli and Diggs also in the show, things don't seem as fun anymore. When Sascha and Nicole buy a mysterious can called Monster Blood is Back, they use it to get back at Ashli and Diggs. But as the Monster Blood grows and grows, can the two get the slime under control or will it swallow up the competition?

R.L. Stine is the creator of the bestselling Goosebumps series, which has more than 400 million copies in print worldwide and celebrated 25 years in 2017. Goosebumps is one of the bestselling children's series of all-time and inspired a popular television show, as well as a feature film starring Jack Black that opened at #1 at the box office. His other popular children's books include the series Fear Street, Mostly Ghostly, The Nightmare Room, and Rotten School, and his first picture book, with Marc Brown, The Little Shop of Monsters. R.L. Stine lives in New York City. You can connect with him on Twitter at @RL_Stine or Facebook: facebook.com/rlstine. For more information, visit rlstine.com and www.scholastic.com/goosebumps.