Fooled by Randomness: The Hidden Role of Chance in Life and in the Markets (Incerto #1) (Hardcover) 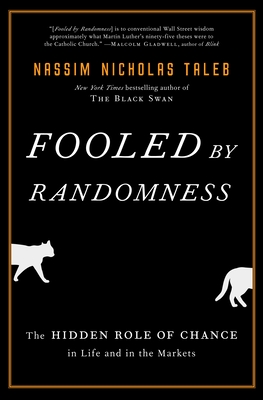 Fooled by Randomness: The Hidden Role of Chance in Life and in the Markets (Incerto #1) (Hardcover)

This is book number 1 in the Incerto series.

Fooled by Randomness is a standalone book in Nassim Nicholas Taleb’s landmark Incerto series, an investigation of opacity, luck, uncertainty, probability, human error, risk, and decision-making in a world we don’t understand. The other books in the series are The Black Swan, Antifragile, Skin in the Game, and The Bed of Procrustes.

Now in a striking new hardcover edition, Fooled by Randomness is the word-of-mouth sensation that will change the way you think about business and the world. Nassim Nicholas Taleb–veteran trader, renowned risk expert, polymathic scholar, erudite raconteur, and New York Times bestselling author of The Black Swan–has written a modern classic that turns on its head what we believe about luck and skill.

This book is about luck–or more precisely, about how we perceive and deal with luck in life and business. Set against the backdrop of the most conspicuous forum in which luck is mistaken for skill–the world of trading–Fooled by Randomness provides captivating insight into one of the least understood factors in all our lives. Writing in an entertaining narrative style, the author tackles major intellectual issues related to the underestimation of the influence of happenstance on our lives.

The book is populated with an array of characters, some of whom have grasped, in their own way, the significance of chance: the baseball legend Yogi Berra; the philosopher of knowledge Karl Popper; the ancient world’s wisest man, Solon; the modern financier George Soros; and the Greek voyager Odysseus. We also meet the fictional Nero, who seems to understand the role of randomness in his professional life but falls victim to his own superstitious foolishness.

However, the most recognizable character of all remains unnamed–the lucky fool who happens to be in the right place at the right time–he embodies the “survival of the least fit.” Such individuals attract devoted followers who believe in their guru’s insights and methods. But no one can replicate what is obtained by chance.

Are we capable of distinguishing the fortunate charlatan from the genuine visionary? Must we always try to uncover nonexistent messages in random events? It may be impossible to guard ourselves against the vagaries of the goddess Fortuna, but after reading Fooled by Randomness we can be a little better prepared.

PRAISE FOR FOOLED BY RANDOMNESS:

Named by Fortune One of the Smartest Books of All Time

A Financial Times Best Business Book of the Year

“[Fooled by Randomness] is to conventional Wall Street wisdom approximately what Martin Luther’s ninety-five theses were to the Catholic Church.”
–Malcolm Gladwell, author of Blink

“The book that rolled down Wall Street like a hand grenade.”
–Maggie Mahar, author of Bull! A History of the Boom, 1982—1999

“Recalls the best of scientist/essayists like Richard Dawkins . . . and Stephen Jay Gould.”
–Michael Schrage, author of Serious Play: How the World’s Best Companies Simulate to Innovate

“We need a book like this. . . . Fun to read, refreshingly independent-minded.”
–Robert J. Shiller, author of Irrational Exuberance

“Powerful . . . loaded with crackling little insights [and] extreme brilliance.”
–National Review
Nassim Nicholas Taleb has devoted his life to problems of uncertainty, probability, and knowledge. He spent nearly two decades as a businessman and quantitative trader before becoming a full-time philosophical essayist and academic researcher in 2006. Although he spends most of his time in the intense seclusion of his study, or as a flâneur meditating in cafés, he is currently Distinguished Professor of Risk Engineering at New York University’s Polytechnic Institute. His main subject matter is “decision making under opacity”—that is, a map and a protocol on how we should live in a world we don’t understand.

Taleb’s books have been published in forty-one languages.
"[Taleb is] Wall Street’s principal dissident. . . . [Fooled By Randomness] is to conventional Wall Street wisdom approximately what Martin Luther’s ninety-nine theses were to the Catholic Church.”
–Malcolm Gladwell, The New Yorker

“Fascinating . . . Taleb will grab you.”
–Peter L. Bernstein, author of Against the Gods: The Remarkable Story of Risk

“We need a book like this . . . fun to read, refreshingly independent-minded.”
–Robert J. Shiller, author of Irrational Exuberance