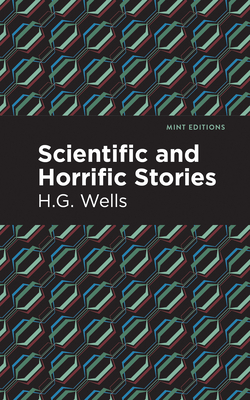 Scientific and Horrific Stories is a collection of short fiction by H. G. Wells. Despite his humble beginnings as the son of English servants, H. G. Wells would become one of the most revered writers of his day.

His stories of adventure, utopia, and terror inspired such vastly different figures as Vladimir Nabokov, Winston Churchill, Jorge Luis Borges, and Sinclair Lewis. Many of his novels have been adapted for film, theater, radio, and television, including The Time Machine (1895), The Island of Doctor Moreau (1896), and The War of the Worlds (1898).

Scientific and Horrific Stories includes twenty-six tales from across Wells' career. "The Chronic Argonauts," written while Wells was recuperating from an illness with friends in Stoke-on-Trent, is a story of time travel set in rural Wales that predates his beloved The Time Machine by seven years. " pyornis Island" is a terrifying tale of greed and survival that originally appeared in an 1894 issue of the Pall Mall Budget. Tasked with finding rare Aepyornis eggs, a rugged Englishman named Butcher ventures to a remote swamp on the island of Madagascar. When one of the eggs unexpectedly hatches, he is left stranded and at the mercy of a vicious creature that was believed to be extinct. In "The Diamond Maker," which also appeared in the Pall Mall Budget, a destitute man tells a wealthy businessman about his years as a maker of artificial diamonds, a time of great promise that ultimately led to his downfall.

With a beautifully designed cover and professionally typeset manuscript, this edition of H. G. Wells' Scientific and Horrific Stories is a classic of English literature reimagined for modern readers.