I Am Not Your Perfect Mexican Daughter (Paperback) 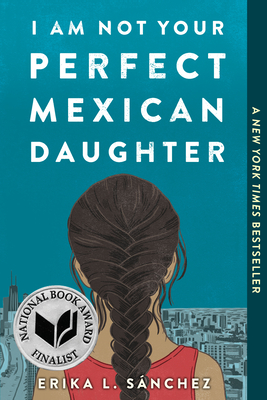 I Am Not Your Perfect Mexican Daughter (Paperback)

By Erika L. Sánchez
List Price: $12.99
Our Price: $11.99
(Save: $1.00 8%)
On Our Shelves Now
NEW YORK TIMES BESTSELLER • NATIONAL BOOK AWARD FINALIST • A “stunning” (America Ferrera) YA novel about a teenager coming to terms with losing her sister and finding herself amid the pressures, expectations, and stereotypes of growing up in a Mexican American home—from the author of Crying in the Bathroom

“Alive and crackling—a gritty tale wrapped in a page-turner. ”—The New York Times

But Julia is not your perfect Mexican daughter. That was Olga’s role.

Then a tragic accident on the busiest street in Chicago leaves Olga dead and Julia left behind to reassemble the shattered pieces of her family. And no one seems to acknowledge that Julia is broken, too. Instead, her mother seems to channel her grief into pointing out every possible way Julia has failed.

But it’s not long before Julia discovers that Olga might not have been as perfect as everyone thought. With the help of her best friend Lorena, and her first love, first everything boyfriend Connor, Julia is determined to find out. Was Olga really what she seemed? Or was there more to her sister’s story? And either way, how can Julia even attempt to live up to a seemingly impossible ideal?
Erika L. Sánchez is a poet, a feminist, and a cheerleader for young women everywhere. She was the sex and love advice columnist for Cosmopolitan for Latinas for three years, and her writing has appeared in Rolling Stone, Salon, and the Paris Review. Since she was a twelve-year-old nerd in giant bifocals and embroidered vests, Erika has dreamed of writing complex, empowering stories about girls of color—what she wanted to read as a young adult. She lives in Chicago, not far from the setting of I Am Not Your Perfect Mexican Daughter. Erika is fluent in Spanish, Spanglish, and cat. You can find out more about her at erikalsanchez.com or by following @ErikaLSanchez on Twitter.
“I fell in love with Erika L. Sánchez’ stunning novel....The depth, wit and searing intelligence of her writing, and her young Latina heroine, struck me to my core and left me wanting so much more." --America Ferrera, Emmy award-winning actress in Ugly Betty

“This book will change everything. . . . A perfect book about imperfection.” —Juan Felipe Herrera, Poet Laureate of the United States

“Blistering. Julia’s persona rockets off the page and into your face from the get-go.” —Christian Science Monitor

“If you ever wanted to [understand] the harsh truths of immigrant life, this is the book you need to read.” —Bustle

“As poignant as it is incisive.” —AV Club

“An earnest and heartfelt tale.” —Booklist

“A timely and must-have account of survival in a culturally contested world.” —SLJ, Starred

"Ultimately, it’s Julia herself who’s the key to the novel... She’ll resonate with many readers, and they’ll be glad to see her make it through a tough time." —The Bulletin, starred review