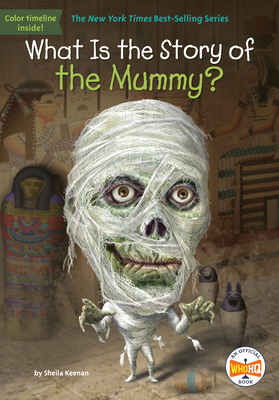 
On Our Shelves Now
Your favorite characters are now part of the Who HQ library!

The Mummy joins other classic horror characters Dracula and Frankenstein in our What Is the Story Of? series.

Unlike the other classic Universal horror movie monsters of their time, the Mummy's origins can't be found in the pages of a book. His story was inspired by the opening of King Tut's tomb in 1922. The world fell in love with all things Egyptian and was enthralled with stories of ancient mummies. The film producers of the early Dracula and Frankenstein films wasted no time creating a character who's been creeping out of his coffin and entertaining audiences since 1932.

Author Sheila Keenan explains the history of the movie and its remakes, the legendary curse of King Tut's mummy, and what lies ahead for this monstrous creature.
Sheila Keenan is an established author of fiction and nonfiction for young people. Her books include the Eisner-nominated graphic novel Dogs of War, the picture book As the Crow Flies, I Spy The Illuminati Eye, and O, Say Can You See? America's Symbols, Landmarks and Inspiring Words, among other selected titles. She lives in New York City. Visit her at www.sheilakeenan.com