The Butcher's Trail: How the Search for Balkan War Criminals Became the World's Most Successful Manhunt (Hardcover) 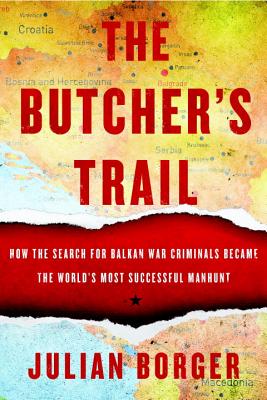 The Butcher's Trail: How the Search for Balkan War Criminals Became the World's Most Successful Manhunt (Hardcover)


Email or call for price.
The gripping, untold story of The International Criminal Tribunal for the former Yugoslavia and how the perpetrators of Balkan war crimes were captured by the most successful manhunt in history

Written with a thrilling narrative pull, The Butcher’s Trail chronicles the pursuit and capture of the Balkan war criminals indicted by the International Criminal Tribunal in The Hague. Borger recounts how Radovan Karadžić and Ratko Mladić—both now on trial in The Hague—were finally tracked down, and describes the intrigue behind the arrest of Slobodan Milosevic, the Yugoslav president who became the first head of state to stand before an international tribunal for crimes perpetrated in a time of war. Based on interviews with former special forces soldiers, intelligence officials, and investigators from a dozen countries—most speaking about their involvement for the first time—this book reconstructs a fourteen-year manhunt carried out almost entirely in secret.

Indicting the worst war criminals that Europe had known since the Nazi era, the ICTY ultimately accounted for all 161 suspects on its wanted list, a feat never before achieved in political and military history.
Julian Borger is the diplomatic editor for The Guardian. He covered the Bosnian War for the BBC andThe Guardian, and returned to the Balkans to report on the Kosovo conflict in 1999.  He has also served as The Guardian’s Middle East correspondent and its Washington bureau chief. Borger was part of theGuardian team that won the 2014 Pulitzer Prize for public service journalism for its coverage of the Snowden files on mass surveillance. He was also on the team awarded the 2013 Investigative Reporters and Editors (IRE) medal and the Paul Foot Special Investigation Award in the UK.
"[A] vivid, page-turning account...A well-organized, deeply researched work that ably digests the Balkan war, the criminals, the criminal court, and its legacy." —Kirkus Reviews (starred review)

“In The Butcher’s Trail, the riveting and important history of the international manhunt for 161 Balkan war criminals… Julian Borger describes the moment investigators tracked down Radovan Karadzic, the leader of the early 1990s genocide against Bosnia’s Muslims…With atrocities committed daily in Syria and elsewhere around the world, and the U.S. and its allies grappling with which of their core values to adhere to against the asymmetric threat of transnational terrorism, the hope of future international justice for war crimes may seem distant. But it is not impossible that major powers may find international judicial tribunals are more an ally than an enemy in the fight against the threats that have developed in the post-Cold War period. If they do, Borger makes clear The Hague tribunal’s efforts to bring Karadzic and other war criminals to justice will have set the high water mark against which future efforts at justice will be measured.” —TIME

“The genocidal crimes of the 1990s Balkan wars stunned the world, mass killings, concentration camps, systematic rape. Many, but by no means all of the perpetrators were the majority Serbs, starting with Serbian President Slobodan Milosevic. The U.N. set up an international tribunal to investigate and indict some 161 people it found most responsible. The challenge was to actually apprehend them. How they did so is captured in a gripping new book by Julian Borger, longtime correspondent and editor at The Guardian newspaper, titled The Butcher’s Trail: How the Search for Balkan War Criminals Became the World’s Most Successful Manhunt… What’s really, truly groundbreaking about this book is what it took to apprehend them.” —PBS NewsHour

“What Julian Borger has achieved in this superb account of the tribunal’s manhunt is much more than a litany of these crimes. It is an elegantly written, powerfully convincing reckoning of how the world stumblingly faced up to a reality that should not have been: war crimes in modern Europe. He focuses on the manhunt as a single thread in the complex Balkan story, partly as a way to reveal how that region influences our wider world today, through rendition, jihad – and the delicate flower of international law…Borger is honest about the muddles and misunderstandings. He recounts America’s early muscle-bound efforts to go after targets…The early snatch operations – target cars being rammed from behind and pushed into pre-arranged ambush positions – provide great military theatre, but Borger shows how the greatest scalps for the tribunal were won through diplomatic finesse: the moderate leaders of Bosnia, Croatia and Serbia were told that a pre-condition of those tiny new nations being welcomed as equals by the international community was the surrender of war crimes suspects.” —The Guardian (US)

“Borger… handles [this] complicated story with flair and confidence. Vividly written, packed with lively character sketches of spymasters, lawyers and diplomats, The Butcher’s Trail is a deeply researched account of the hunt for some of the worst war criminals of the late 20th century…[and] an important work that adds greatly to our understanding of how international criminal justice has evolved and offers lessons for future war crimes investigations.”—Newsweek

"The Butcher’s Trail create[s] what may ultimately become one of the defining accounts of this episode of Balkan history." —The National

"Borger’s compelling, readable prose with these stories of assault on impunity offer a rare opportunity to penetrate the 'nationalist bromides' and 'sounds of slogans' that continue to hold these countries back in ways that are tragic in all sorts of new, post-war ways...Fascinating." —The Arts Fuse

"Presented in captivating detail [and] often playing out like a true-life spy novel...fascinating." —Library Journal

"The Butcher’s Trail achieves the dual feat of being both informative and gripping. Borger’s thorough research comprises numerous books, articles, and recently declassified documents on the Balkan conflict and international justice but also first-hand interviews with key players: former soldiers, intelligence officials, investigators, prosecutors, and diplomats from a dozen countries. In addition, Borger impresses by not only divulging facts and dropping shock revelations (Vladimir Putin’s spy agency, the FSB, took a pro-Serbia stance and protected Mladić) but also analyzing testimonies, evaluating the various mindsets of criminals on The Hague’s list and weighing up conspiracy theories. He even provides close readings of Karadžić’s doggerel poetry—art of the same caliber as Hitler’s watercolors—for indications of inner tumult and hints of future crimes." —Daily Beast

"The Butcher’s Trail takes an immediate place on the short shelf of indispensable books about the Milosevic war and its long and complicated aftermath. Borger’s vivid prose and closely-channelled moral involvement give his account a memorable power. Living history is seldom written this well."—Open Letters Monthly

“The Butcher’s Trail reads like a cross between a John le Carre novel and the latest Bourne installment.  Except this fine book is true.  At a time when Europe’s ugly nationalisms are resurgent, Borger’s account of war crimes in the former Yugoslavia and the pursuit of justice could not be more important.” —Eric Schlosser, author of Command and Control: Nuclear Weapons, the Damascus accident, and the Illusion of Safety

“Julian Borger reveals in riveting new detail exactly how a daring team secretly tracked down some of the worst war criminals of our time, and in doing, he shows us what it takes for justice to win.  This book is brilliantly researched, beautifully written and important.” —Ann Curry

“Julian Borger’s thrilling history of the hunt for the infamous Balkan war criminals—Slobodan Milosevic and Radovan Karadzic among them euphemisms for late 20th Century evil—and the torturous path to creating and empowering the International Criminal Tribunal is not just masterfully told, but devastating in its revelations of complacency in the face of ethnic cleansing.” —Hooman Majd, author of NY Times bestsellerThe Ayatollah Begs to Differ, among other books and writings.

“Julian Borger has written the definitive account of the hunt for the war criminals of the former Yugoslavia. The Butcher’s Trail is wonderfully well written and deeply reported and it raises important questions about how to bring to justice those that have committed wars against humanity.”  —Peter Bergen, author of Manhunt: The Ten-Year Search for Bin Laden from 9/11 to Abbottabad.

“Julian Borger has unlocked the hidden stories of a historic manhunt. This book is a powerful page turner that catapults you through two decades of political intrigue, deceit, and erratic leadership, competing intelligence agencies, botched operations with fugitive deaths, and then a steady surge of successful snatches on remote mountain roads and in sleepy villages, in warm apartments stocked with weaponry, and unawares at a Spanish restaurant with barely sipped wine. Borger proves the worth of the tribunal and those who delivered the agents of evil to its doorstep.” —David Scheffer, U.S. Ambassador at Large for War Crimes Issues (1997-2001) and law professor at Northwestern University