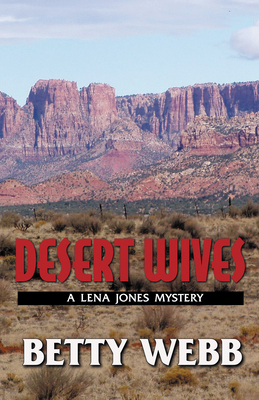 This is book number 2 in the Lena Jones series.

Now in its second edition, Betty Webb's Desert Wives is a startling, real look into the polygamous communities of Northern Arizona. When private detective Lena Jones helps thirteen-year-old Rebecca escape from Purity, a polygamy compound hidden in a desolate area straddling the Utah/Arizona border, she uncovers more than she bargained for. Rebecca's mother has now been arrested for the murder of Prophet Solomon Royal, Rebecca's intended husband. So Lena enters Purity masquerading as a polygamist wife to uncover the real murderer. What secrets are the Circle of Elders so desperate to protect?

Lena thinks she's put her own past behind her, but the sins of Purity's mothers and fathers force her to reexamine the scant memories of her early childhood. At the age of four she was found lying unconscious by the side of an Arizona highway, a bullet in her head. Raised in a series of foster homes, Lena does not remember her real name or the names of her parents. Are Lena's past and this new case somehow connected?

Before writing mysteries full time, Betty Webb worked as a journalist, interviewing everyone from U.S. presidents and Nobel Prize winners, to the homeless andpolygamy runaways. Most of her books are based on the stories she covered as a reporter.Today she's a volunteer at the Phoenix Zoo, andis also a member of the National Federation of Press Women, Mystery Writers of America, the Society of Southwestern Authors, and Women Writing the West."

"If Betty Webb had gone undercover and written Desert Wives as a piece of investigative journalism, she'd probably be up for a Pulitzer…” --New York Times of Desert Wives   “Dark humor and thrilling action inform Webb’s second Lena Jones mystery, a searing exposé of the abuses of contemporary polygamy…. The beauty of the Southwestern backdrop belies the harshness of life, the corrupt officials, brutal men and frightened women depicted in this arresting novel brimming with moral outrage. If the nation isn’t too absorbed in fighting religious tyranny abroad, this book could do for polygamy what Uncle Tom’s Cabin did for slavery.” –Publishers Weekly of Desert Wives   “Stark desert surroundings underscore the provocative subject matter, the outspoken protagonist, and the “insider” look at polygamist life. Webb’s second Lena Jones mystery, after Desert Noir, is recommended for most collections.” –Library Journal of Desert Wives