What Adam Smith Knew: Moral Lessons on Capitalism from Its Greatest Champions and Fiercest Opponents (Paperback) 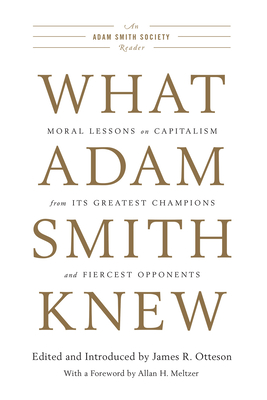 What Adam Smith Knew: Moral Lessons on Capitalism from Its Greatest Champions and Fiercest Opponents (Paperback)


Usually Ships in 2-5 Days
What exactly is capitalism, and why do its advocates support it? What are the main objections to capitalism that have been raised by its critics? Are there moral reasons to support capitalism, or to oppose it? In this time of globalization and economic turbulence, these questions could not be more timely or more important. This book provides some answers through seminal readings on the nature, purpose, and effects of capitalism as understood by its most influential expositors, both historical and contemporary. In addition to Adam Smith himself, the selections gathered here include essays and excerpts by thinkers ranging from Locke and Rousseau to Hayek and Cass Sunstein. All are chosen and arranged to highlight the ways that capitalism bears on a set of fundamental human concerns: liberty, equality, social order, virtue and motivation. If you want to develop an informed judgment about whether markets and morality mix, this anthology is a good place to begin.

James R. Otteson is the executive director of the BB&T Center for the Study of Capitalism, and teaching professor of political economy at Wake Forest University. He received his B.A. from Notre Dame and his Ph.D. from the University of Chicago. His published works include Adam Smith's Marketplace of Life (Cambridge, 2002) and Actual Ethics (Cambridge, 2006), the latter of which won the 2007 Templeton Enterprise Award. His most recent book is Adam Smith (Bloomsbury, 2013). His next book, The End of Socialism, will be published by Cambridge University Press in 2014.