Mythical River: Chasing the Mirage of New Water in the American Southwest (Paperback) 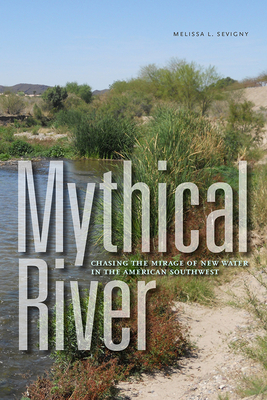 Mythical River: Chasing the Mirage of New Water in the American Southwest (Paperback)


Email or call for price.
In a lyrical mix of natural science, history, and memoir, Melissa L. Sevigny ponders what it means to make a home in the American Southwest at a time when its most essential resource, water, is overexploited and undervalued. Mythical River takes the reader on a historical sojourn into the story of the Buenaventura, an imaginary river that led eighteenth- and nineteenth-century explorers, fur trappers, and emigrants astray for seventy-five years. This mythical river becomes a metaphor for our modern-day attempts to supply water to a growing population in the Colorado River Basin. Readers encounter a landscape literally remapped by the search for “new” water, where rivers flow uphill, dams and deep wells reshape geography, trees become intolerable competitors for water, and new technologies tap into clouds and oceans.

In contrast to this fantasy of abundance, Sevigny explores acts of restoration. From a dismantled dam in Arizona to an accidental wetland in Mexico, she examines how ecologists, engineers, politicians, and citizens have attempted to secure water for desert ecosystems. In a place scarred by conflict, she shows how recognizing the rights of rivers is a path toward water security. Ultimately, Sevigny writes a new map for the future of the American Southwest, a vision of a society that accepts the desert’s limits in exchange for an intimate relationship with the natural world.

Melissa L. Sevigny grew up on a four-acre plot of Sonoran desert on the outskirts of Tucson, Arizona. She currently writes science stories for KNAU (Arizona Public Radio) and lives in Flagstaff, Arizona.

“Mythical River is an excellent read and an important contribution to the literature of the Southwest, especially that which focuses on water. The book’s scope moves from the micro to the human-scaled to the planetary, but it is all tied together to give a complete picture of the southwestern environment and the vital part water plays within it.”—Christopher Cokinos, author, Bodies, of the Holocene


“Mythical River is a well-researched and timely exploration of the geology, ecology, history, practices, and politics of water in the American Southwest. Melissa Sevigny cuts through ‘the mirage’ in how people view this arid landscape, a landscape remapped by the twentieth-century search for new water, and gets real about what?it means to live in such a place. As the Southwest suffers through the decades-long drought and impacts of climate change, this work is a welcome call for mindful engagement with these issues.”—Alison Hawthorne Deming, author, Zoologies: On Animals and the Human Spirit


“Melissa Sevigny deftly explores the water use history of the Colorado River Basin, contrasting apocryphal assumptions, neglected prophesies, misdirected politics and projects, and the fruits of greed and ignorance with the current perilous state of water in the West. Through well-chosen case studies, rigorous, objective mining of the data, careful synthesis, and lyrical reportage, Mythical River offers a rich, detailed picture of the current state of the single most important and contested resource in the ever-growing West.”—Robert Michael Pyle, author, Sky Time in Gray’s River: Living for Keeps in a Forgotten Place