Dancing in the Glory of Monsters: The Collapse of the Congo and the Great War of Africa (Paperback) 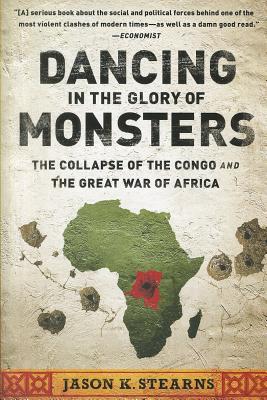 Dancing in the Glory of Monsters: The Collapse of the Congo and the Great War of Africa (Paperback)


Email or call for price.
A "tremendous," "intrepid" history of the devastating war in the heart of Africa's Congo, with first-hand accounts of the continent's worst conflict in modern times.

At the heart of Africa is the Congo, a country the size of Western Europe, bordering nine other nations, that since 1996 has been wracked by a brutal war in which millions have died. In Dancing in the Glory of Monsters, renowned political activist and researcher Jason K. Stearns has written a compelling and deeply-reported narrative of how Congo became a failed state that collapsed into a war of retaliatory massacres. Stearns brilliantly describes the key perpetrators, many of whom he met personally, and highlights the nature of the political system that brought these people to power, as well as the moral decisions with which the war confronted them. Now updated with a new introduction, Dancing in the Glory of Monsters tells the full story of Africa's Great War.
Jason Stearns is a CIC Senior Fellow and Director of the Congo Research Group. Jason has been working on conflict dynamics in Central Africa since 2001. He has worked for the International Crisis Group, the UN Group of Experts on the DR Congo, and the Rift Valley Institute.
An Economist and Wall Street Journal Best Book of the Year


"He is a cracking writer, with a wry sense of understatement... Mr. Stearns has spoken to everyone-villagers, child soldiers, Mobutu's commanders, Kabila's ministers, Rwandan intelligence officers. In these conversations he found gold, bringing clarity-and humanity-to a place that usually seems inexplicable and barbaric. Dancing in the Glory of Monsters is riveting and certain to become essential reading for anyone looking to understand Central Africa."—Douglas Rogers, The Wall Street Journal

"The best account [of the conflict in the Congo] so far; more serious than several recent macho-war-correspondent travelogues, and more lucid and accessible than its nearest competitor. . . . [Stearns] has lived in the country, and has done a raft of interviews with people who witnessed what happened before he got there... his picture is clear, made painfully real by a series of close-up portraits."
—Adam Hochschild, The New York Times Book Review

"Enter Jason Stearns. One of Congo's most intrepid observers, he describes the war from the point of view of its perpetrators. He has tracked down and interviewed a rogue's gallery of them. The resulting book, Dancing in the Glory of Monsters, is a tour de force, though not for the squeamish."
—The Washington Post

"[Stearns] is probably the most widely traveled and the most meticulous and empathetic observer of the war there. This is a serious book about the social and political forces behind one of the most violent clashes of modern times-as well as a damn good read."—The Economist

"A serious, admirably balanced account of the crisis and the political and social forces behind it, providing vivid portraits of both victims and perpetrators and eyewitness accounts of the main events... perhaps the most accessible, meticulously researched and comprehensive overview of the Congo crisis yet."
—Financial Times

"[A] tremendous book. This is a very complicated, largely unfamiliar subject that's basically off the radar of the American media and he's managed to produce a genuinely readable and engrossing account. To the extent that it's possible to breeze through a book about a years-long bloody civil war I breezed right through it."
—Matthew Yglesias, ThinkProgress.org

"The subject he has tackled is vast and impossible to cover in one book. But for anyone interested in the Congo and the Great Lakes region this is a great read-one I highly recommend."—Stephanie Wolters, Mail & Guardian (Johannesburg)

"A brave and accessible take on the leviathan at the heart of so many of Africa's problems . . . Stearns's eye for detail, culled from countless interviews, brings this book alive . . . I once wrote that the Congo suffers from 'a lack of institutional memory,' meaning that its atrocities well so inexorably that nobody bothers to keep an account of them. Stearns's book goes a long way to putting that right."—The Telegraph

"This courageous book is a plea for more nuanced understanding and the silencing of the analysis-free 'the horror, the horror' exclamation that Congo still routinely wrings from Western lips."—Michela Wrong, The Spectator

"Stearns's objective in his book is to pick apart the political causes behind this war, to make sense of the madness-and to select individuals, such as a father in Kisangani who helplessly watches his son bleed to death after a senseless battle, whose stories will make us care... Stearns succeeds. His book is engrossing, persuasive, copiously researched, well-organized, well-sourced, and viscerally disturbing."—Jeffrey Gettleman, The New Republic

"Stearns has done a fine job of amassing vast amounts (of material), much of it based directly on interviews with the participants and victims, to bring to light details of a scandalously under-reported war...(T)his book succeeds in providing a vivid chronicle of this rolling conflict involving rival rebel groups."
—Sunday Times

"Impressively controlled account of the devastating Congo war.... The book's greatest strength is the eyewitness dialogue; Stearns discusses his encounters with everyone from major military figures to residents of remote villages (he was occasionally suspected of being a CIA spy).... An important examination of a social disaster that seems both politically complex and cruelly senseless."
—Kirkus

"On the ground in Congo for a decade, he has written a compelling history of the turmoil, combining a deep sympathy for the people's plight and a sharp analytical eye on the reasons for the unfolding disasters. Stearns' great strength is his ability to tell the tortuous history of the past decade and a half by bringing on the Congolese people themselves as the central players in the drama.... Unsparing in his critique of the vanity and greed of Congo's political class, Stearns also gives an incomparable eye-witness account of a system that tries to suck everyone into a vortex of compromise and corruption."—The Africa Report