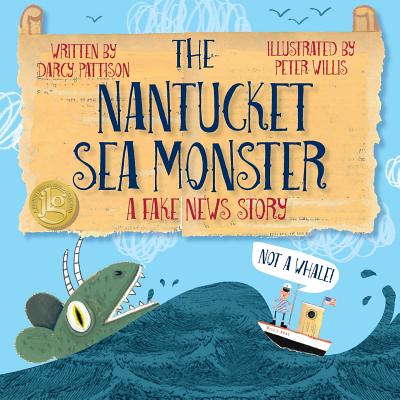 Do you believe everything you read in the newspaper?

Early in August 1937, a news flash came: a sea monster had been spotted lurking off the shore of Nantucket Island. Historically, the Massachusetts island had served as port for whaling ships. Eyewitnesses swore this wasn't a whale, but some new, fearsome creature. As eyewitness account piled up, newspaper stories of the sea monster spread quickly. Across the nation, people shivered in fear.

Then, footprints were found on a Nantucket beach. Photographs were sent to prominent biologists for their opinion. Discussion swirled about raising a hunting party.

On August 18, news spread across the island: the sea monster had been captured. Islanders ran to the beach and couldn't believe their eyes.

This nonfiction picture book is a perfect tool to discuss non-political fake news stories. Tony Sarg, famous as the inventor of the Macy's Thanksgiving Day Parade balloons, Macy's officials and newsmen cooperated in a huge publicity stunt. The fake news generated was valued at thousands of dollars of free publicity.

Back matter discusses the freedom of the press guaranteed by the First Amendment to the U.S. Constitution. Quotes from Thomas Jefferson make it clear that fake news has always been one of the costs of a free press. A Timeline lists actual events in the order they occurred. A vocabulary list defines relevant words.

Read this incredible true story of how Tony Sarg and the press knowingly fooled everyone with fake news.