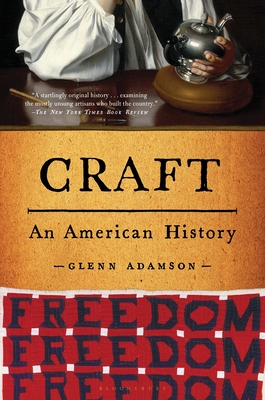 A groundbreaking and endlessly surprising history of how artisans created America, from the nation's origins to the present day.

At the center of the United States' economic and social development, according to conventional wisdom, are industry and technology-while craftspeople and handmade objects are relegated to a bygone past. Renowned historian Glenn Adamson turns that narrative on its head in this innovative account, revealing makers' central role in shaping America's identity. Examine any phase of the nation's struggle to define itself, and artisans are there-from the silversmith Paul Revere and the revolutionary carpenters and blacksmiths who hurled tea into Boston Harbor, to today's “maker movement.” From Mother Jones to Rosie the Riveter. From Betsy Ross to Rosa Parks. From suffrage banners to the AIDS Quilt.

Adamson shows that craft has long been implicated in debates around equality, education, and class. Artisanship has often been a site of resistance for oppressed people, such as enslaved African-Americans whose skilled labor might confer hard-won agency under bondage, or the Native American makers who adapted traditional arts into statements of modernity. Theirs are among the array of memorable portraits of Americans both celebrated and unfamiliar in this richly peopled book. As Adamson argues, these artisans' stories speak to our collective striving toward a more perfect union. From the beginning, America had to be-and still remains to be-crafted.

Glenn Adamson's books include Fewer, Better Things, The Invention of Craft, and The Craft Reader. His writings have also been published in museum catalogues and in Art in America, Antiques, frieze, and other periodicals. He was previously director of the Museum of Arts and Design, New York, and has held appointments as Senior Scholar at the Yale Center for British Art, and as Head of Research at the Victoria and Albert Museum, London. He lives in the Hudson Valley, New York.

"A blow-by-blow chronicle of this country through the lens of craft, from the European settlers to the maker movement and so-called craftivists of today. That no one has ever previously attempted this may be because when we bother to think about craft at all, it is usually through a gauzy haze. Yet Adamson manages to discover ‘making’ in every aspect of our history, framing it as integral to America’s idea of itself as a nation of self-sufficient individualists. There may be no one better suited to this task." - The New York Times Book Review

"[Adamson's] most significant book published to date … To write with this depth of political and historical knowledge requires enormous amounts of research, as well as meticulous consideration given to the complex dynamics occurring in American history, vis-a-vis race, class and gender. At the center of Craft is a nuanced understanding of the contradictory relations that emerge when craft encounters capital and power … this kind of political astuteness and sensitivity remains rare in writing about craft, and we need much more of it." - Journal of Design History

“A rich chronicle of craft in America from Jamestown to the present day . . . Adamson leads us on a chronological journey through American history, pointing out along the way-sometimes in lush detail-the various craft movements and ideas that were prominent at certain times. The text swarms with interesting anecdotes and names-some well-known and others who will be less familiar to most readers . . . Thoroughly researched and written with passion-and a bit of bite.” —Kirkus Reviews, starred review

“A gem of a book. Every chapter is chock-full of fascinating stories and interesting facts. Adamson collects nuggets from history, fiction, and even poetry to bring the world of the American craftsperson vividly to life.” —Tyler Anbinder, author of CITY OF DREAMS: The 400-Year Epic History of Immigrant New York

“Erudite and immersive . . . With lucid prose and exemplary research, Adamson brings intriguing new details and unusual perspectives to even the most familiar story lines. The result is an elegant, detailed, and functional history worthy of its subject.” —Publishers Weekly

“Narrate[s] plainly how America was built, who made it, and the stories the nation tells about itself . . . a celebratory history of craft's potential to liberate America from its racism, xenophobia, and sexism.” —Booklist

“A comprehensive volume perfect for academic use or ambitious novice readers.” —Library Journal

"From America's earliest years, workers have had to contend with prejudice based on their ethnicity, race, religion, gender and age. We are still dealing with the legacy of such injustice, making Craft a ‘tract for our times,’ as well as an important work of historical research." - Art Eyewitness

"Profound and engaging . . . Timely, not just because it had the luck to be published during a global crisis that demanded manual mask-making and the desperate invention of table-top activities for under-twelves, but more importantly because of issues it brings to the fore about labor and value." - The New York Review of Books

"The best amalgam of aesthetics, history, economics, and technology I’ve read . . . Adamson is the greatest decorative-arts curator of his generation." - The National Review

"Though Americans know Betsy Ross and Paul Revere, Adamson, a writer and curator, introduces readers to a host of less-well-known craftspeople…Adamson connects iconic events such as the first Thanksgiving, the Boston Tea Party, the building of the atomic bomb, and the AIDS Memorial Quilt to the craftspeople who made them all possible." - CHOICE