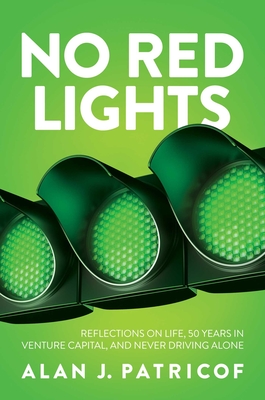 
Usually Ships in 2-5 Days
As featured in The Wall Street Journal!

A look back at entrepreneurial growth and venture capital in the last half century by one of the leading figures in the industry.

Extensive media and online coverage of the business arena, news of start-ups, mergers, and deals are familiar headlines these days. But that wasn’t always the case. The early years of venture capital were a far cry from today’s very public dealings. Alan Patricof, one of the pioneers of the venture arena, offers a behind-the-scenes look at the past fifty years of the industry. From buying stock in Apple when its market valuation was only $60 million to founding New York Magazine to investing in AOL, Audible, and more recently, Axios, his discerning approach to finding companies is almost peerless.

All of Patricof’s investments—from Xerox to Venmo—share certain qualities. Each company had sound product with wide appeal, the economics were solid, and the management team was talented and committed to seeing their visions come to fruition.
Alan Patricof has started three separate successful firms that have made a mark on the venture community over the past fifty years. These firms have participated in the financing at an early stage of more than 500 companies including Apple Computer, AOL, Office Depot, Cellular Communications, New York Magazine, Audible, Huffington Post, Sunglass Hut, Axios, and the list goes on. In addition to his professional business career, he has lived an eclectic life participating in politics, art, theatre, and international development, while being a 5x marathon runner, a world traveler, and a person who lives life to its fullest. At age eighty-seven, he is still working full-time, rides a bike twenty miles a weekend, hikes several times a week, and is pursuing an active personal life.

He was married for fifty years to his extraordinary wife, Susan, until she passed away from Alzheimer’s last year. He lives in NYC and has three sons and seven grandchildren.
"Our dear friend Alan Patricof is one of the most fascinating people we know—constantly looking for new ways to learn and grow, to be ahead of the next curve, and to embark on another adventure. In No Red Lights, he shares a useful roadmap for building a life and career that is successful, interesting, and fulfilling. Like Alan himself, this wonderful book is brimming with wisdom and wit, energy and exploration, curiosity and common sense."
— President Bill Clinton and Secretary Hillary Rodham Clinton

“Alan Patricof has had extraordinary success in the investment world with his innovative and forward-thinking approach. In this captivating memoir, he offers an insider’s perspective on some of the most notable business deals of the past fifty years, and gives us a look at what makes companies successful over the long-term. The book is a must read for anyone interested in the world of venture capital.”
— Arianna Huffington, Founder and CEO, Thrive Global

“Alan Patricof believed in Audible when we were little more than a vision of the possible. No Red Lights is a chronicle of a ceaselessly curious investor’s singular journey through decades of innovation and a life well lived.”
— Don Katz, Founder and Executive Chairman, Audible

“Alan Patricof has always been ahead of the curve. I saw that firsthand as Alan invested in America Online in its infancy, when only 3 percent of consumers were online and most people didn’t believe in the Internet’s potential—but he did. This book is packed full of riveting stories from Alan’s extraordinary life, that can help inspire and guide your life.”
— Steve Case, Co-founder, AOL, CEO, Revolution

“After the first few pages, you want to put this book down and get to your dream. That’s what Alan does to you. He’s the best in the business, and his love attracts you.”
— Iqram Magdon-Ismail, Co-Founder, Venmo