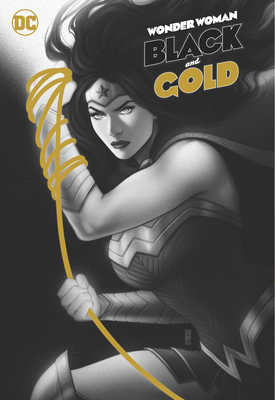 
Usually Ships in 2-5 Days
In honor of Wonder Woman’s 80th anniversary, DC proudly presents a new anthology series starring the Amazon Princess—embellished in the color of her famous lasso!

In the tradition of Batman Black and White, Wonder Woman Black and Gold is a thrilling anthology celebrating the woman who inspires us all…and that’s the truth!

Kicking things off, John Arcudi (B.P.R.D.) and Ryan Sook (Legion of Super-Heroes) reunite to show us the grace immortality grants a hero. Becky Cloonan (Wonder Woman) weaves a spine-tingling tale of Diana’s most precious weapon against the darkness. Then Amy Reeder (Amethyst) takes us back to the Golden Age for a fun romp co-starring Etta Candy. AJ Mendez and Ming Doyle (Constantine: The Hellblazer) travel to Themyscira for a tense family reunion. And finally, Nadia Shammas and Morgan Beem (Swamp Thing: Twin Branches) show us a story of Diana’s past failures coming back to haunt her. And that’s just the beginning, with this all-star anthology featuring unique stories by Mariko Tamaki, Tillie Walden, Jamie McKelvie, Marguerite Sauvage, and more!

This volume collects Wonder Woman Black and Gold #1-6.
Mariko Tamaki is a Canadian writer living in Oakland. Works include New York Times bestseller This One Summer and Skim with Jillian Tamaki, Emiko Superstar with Steve Rolston, and the YA novel (You) Set Me on Fire. This One Summer was the winner of Printz and Caldecott Honors in 2015 and received the Eisner Award for Best Graphic Album (New).

Tillie Walden is an American cartoonist who has published five graphic novels and a webcomic. Walden won the 2018 Eisner Award for Best Reality-Based Work for her graphic novel, Spinning. She teaches at the Center for Cartoon Studies.

Rachel Smythe is a comic artist and folklorist based out of Wellington, New Zealand, and the creator of the Eisner-nominated Lore Olympus, published via Webtoon.