Climate Crisis and the Global Green New Deal: The Political Economy of Saving the Planet  (Paperback) 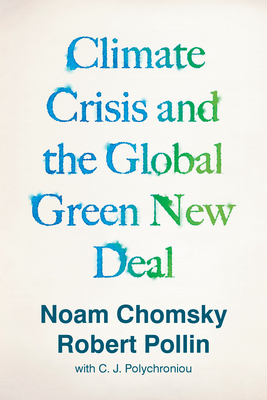 Climate Crisis and the Global Green New Deal: The Political Economy of Saving the Planet  (Paperback)


Usually Ships in 2-5 Days
An engaging conversation with Noam Chomsky—revered public intellectual and Manufacturing Consent author—about climate change, capitalism, and how a global Green New Deal can save the planet.

An engaging conversation public intellectual and Manufacturing Consent author Noam Chomsky about the climate change, capitalism, and how a global Green New Deal can save the planet.

Together, Chomsky and Pollin show how the forecasts for a hotter planet strain the imagination: vast stretches of the Earth will become uninhabitable, plagued by extreme weather, drought, rising seas, and crop failure. Arguing against the misplaced fear of economic disaster and unemployment arising from the transition to a green economy, they show how this bogus concern encourages climate denialism.

Humanity must stop burning fossil fuels within the next thirty years and do so in a way that improves living standards and opportunities for working people. This is the goal of the Green New Deal and, as the authors make clear, it is entirely feasible. Climate change is an emergency that cannot be ignored. This book shows how it can be overcome both politically and economically.
Noam Chomsky is Institute Professor Emeritus at the Massachusetts Institute of Technology and Laureate Professor at the University of Arizona. Author of American Power and the New Mandarins and Manufacturing Consent (with Ed Herman), among many other books, he is a linguist, historian, philosopher, and cognitive scientist who has risen to prominence in the American consciousness as a political activist and the nation’s foremost public intellectual.

Robert Pollin is Professor of Economics and founding Co-Director of the Political Economy Research Institute (PERI) at the University of Massachusetts-Amherst. Among his many books are The Living Wage (with Stephanie Luce) and the edited volume Transforming the US Financial System (with Gary Dymski and Gerald Epstein). He has worked with the Joint Economic Committee of the US Congress and the United Nations Development Program.
“This book is a survival manual for civilization. I want everyone—yes, every person on the planet—to learn its message and to face the challenge it poses: ‘What am I doing to help bring about a global Green New Deal in the early years of this decade?’ For Americans, the first steps are clear: consign all climate deniers to permanent political oblivion and force all other policymakers to match fine words with deeds—i.e. commit to the Pollin–Chomsky global program for climate stabilization, a massive expansion of good jobs, and just transition.”
—Daniel Ellsberg, author of The Doomsday Machine

“The project that is the Green New Deal is enriched by the insights of two great minds: those of Noam Chomsky and Robert Pollin. Both understand that the GND will fail if it does not protect the jobs and livelihoods of the working class. They explain how a transformation needed to restore the ecosystem can, and will transform the organisations and lives of working people worldwide—for the better.”
—Ann Pettifor, author of The Case for The Green New Deal

“[Chomsky and Pollin] argue it is possible to tackle climate collapse over the next 30 years … A capitalist system that fails to respond does not deserve to survive.”
—Irish Times

“Emphasises the crisis our planet faces but also says ‘there is a solution at hand.’”
—Irish Examiner