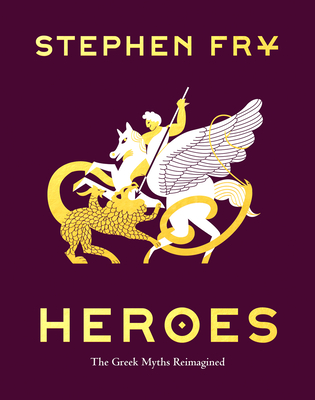 
On Our Shelves Now
In this sequel to the bestselling Mythos, legendary author and actor Stephen Fry moves from the exploits of the Olympian gods to the deeds of mortal heroes.

Perseus. Jason. Atalanta. Theseus. Heracles. Rediscover the thrills, grandeur, and unabashed fun of the Greek myths. Whether recounting a tender love affair or a heroic triumph, Fry deftly finds resonance with our own modern minds and hearts.

Illustrated throughout with classical art inspired by the myths, this gorgeous volume invites you to explore a captivating world with a brilliant storyteller as your guide.

• Each adventure is infused with Fry's distinctive voice and writing style.
• Connoisseurs of the Greek myths will appreciate this fresh-yet-reverential interpretation, while newcomers will feel welcome.
• Retellings brim with humor and emotion.

"Mostly Chiron saw in the child, and the young man he became, boundless courage, athleticism, intelligence, and ambition. He saw too lots of words beginning with 'self,' which gave him pause. Self-belief, self-possession, self-righteousness, self-confidence, self-love. Perhaps these characteristics are as necessary to a hero as courage."

In Heroes, Fry draws out the humor and pathos in both tender love affairs and heroic battles, and reveals each myth's relevance for our own time.

• A collector's edition filled with classical art inspired by the myths and a luxe, foil-stamped jacket
• Perfect gift for mythology and history buffs, lovers of ancient Greece, art aficionados, and devoted fans of Stephen Fry
• Add it to the shelf with books like Circe by Madeline Miller, Norse Mythology by Neil Gaiman, and Mythology: Timeless Tales of Gods and Heroes by Edith Hamilton
Stephen Fry is an award-winning writer, comedian, actor, and director. He rose to fame in A Bit of Fry & Laurie and Jeeves and Wooster. He hosted over 180 episodes of QI, and narrated the audio versions of the Harry Potter novels. His books include four novels and three volumes of autobiography. He lives in Los Angeles and London.
Holiday Gift Guide selection - Geek Dad

"Both Mythos and Heroes are an accessible introduction to the Greek pantheon and the mythology that grew from there. Some of it is a bit gory, some of it lusty, all of it an insight into base humanity. Fry's humor weaves its way throughout the tales, and you learn to hold loosely your ideas of fact and fiction in the stories that you are reading. A good lesson for our times" - Geek Mom

"Actor and author Stephen Fry retells the stories of Greek Heroes in an imaginative and witty manner...Each of the tales of Perseus, Heracles, Bellerophon, Jason, Atalanta, Oedipus and Theseus is reimagined in modern vernacular and there is never a boring moment. Illustrated with classic artwork, this is a handsome and well-researched book." - Denton Record-Chronicle

"British actor, comedian, documentarian, and author Stephen Fry dedicates this second volume of his series about the great world myths to "all the heroes we never heard of. Perhaps you are one." His versions of Greek heroic literature owe much to his deep reading of the originals, but these aren't your decorous Edith Hamilton Greek myths. They're cheeky and witty, and, above all, they bring the larger-than-life figures back to human scale - as if Fry had channeled Monty Python. Reading Heroes might not turn you into one, but it'll likely make you ponder how to bring a bit of heroism into everyday life."