The Future is Degrowth: A Guide to a World Beyond Capitalism (Paperback) 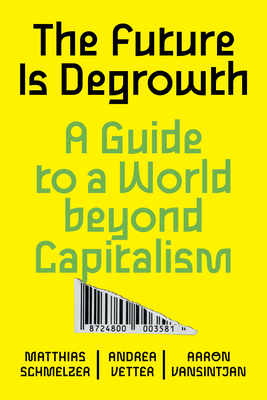 The Future is Degrowth: A Guide to a World Beyond Capitalism (Paperback)

We need to break free from the capitalist economy. Degrowth gives us the tools to bend its bars.

Economic growth isn’t working, and it cannot be made to work. Offering a counter-history of how economic growth emerged in the context of colonialism, fossil-fueled industrialization, and capitalist modernity, The Future Is Degrowth argues that the ideology of growth conceals the rising inequalities and ecological destructions associated with capitalism, and points to desirable alternatives to it.

Not only in society at large, but also on the left, we are held captive by the hegemony of growth. Even proposals for emancipatory Green New Deals or postcapitalism base their utopian hopes on the development of productive forces, on redistributing the fruits of economic growth and technological progress. Yet growing evidence shows that continued economic growth cannot be made compatible with sustaining life and is not necessary for a good life for all.

This book provides a vision for postcapitalism beyond growth. Building on a vibrant field of research, it discusses the political economy and the politics of a non-growing economy. It charts a path forward through policies that democratise the economy, “now-topias” that create free spaces for experimentation, and counter-hegemonic movements that make it possible to break with the logic of growth. Degrowth perspectives offer a way to step off the treadmill of an alienating, expansionist, and hierarchical system.

A handbook and a manifesto, The Future Is Degrowth is a must-read for all interested in charting a way beyond the current crises.

Matthias Schmelzer is a Berlin-based economic historian, social theorist and climate activist. He works at Friedrich-Schiller University of Jena and is active in various social-ecological networks and movements. He has published The Hegemony of Growth and edited Degrowth in Movement(s).

Aaron Vansintjan lives in Montreal and writes about food, cities, politics, and ecology. He is the co-founder of Uneven Earth, a website focusing on ecological politics. He has been published in The Guardian, Briarpatch Magazine, Red Pepper, Truthout, Open Democracy, and The Ecologist.

Andrea Vetter is a transformation researcher, activist and journalist, using degrowth, commons and critical eco-feminism as tools. She teaches transformation design at Braunschweig University of Art. She is editor of the magazine Oya and lives in and is co-founder of the House of Change, a transregional rural space for art, learning and co-creation in Eastern Germany.
“A most comprehensive analysis of the different trends converging in the degrowth movement, showing its capacity to both subvert the logic of capitalism and project visions of social justice. A book that powerfully challenges any reductive views of degrowth.”
—Silvia Federici

“The Future Is Degrowth offers a sober presentation of the futility of the ideology and pursuit of infinite growth on a finite planet. Current multiple crises, including the unfolding catastrophic global heating, ought to force humans to pull the brakes on current fatal pathways. However, myopia has locked humans in a fatal pursuit of wealth, power and externalizations built on the platform of oppression, colonial exploitation, ecological despoliation and barbaric economic supremacy made possible by militarism, cultural manipulations, delineation of sacrificial zones and acceptance of enforcement of sacred or untouchable zones to sustain unquenchable consumption and wasteful appetites. This book presents a call for a world in which, through sober acceptance of having toed highly destructive growth, consumption and developmental paths, human beings understand and respect the ecological limits of Mother Earth her and regain both their humanity and place in the communities of other beings.”
—Nnimmo Bassey, author of To Cook a Continent, Destructive Extraction and the Climate Crisis in Africa

“In economics, ‘growth’ implies a malignancy absent in nature: perpetual expansion and extraction. This book rigorously demolishes a concept that is the intellectual foundation of today’s economics profession, a central pillar of capitalism and the source of ecological depletion.”
—Ann Pettifor

“A radical critique of capitalist growth and a powerful vision for a more just and ecological future. Don’t miss this book.”
—Jason Hickel